It came as a surprise: If tin atoms are arranged on a silicon substrate in a special way, the material becomes magnetic. University of Würzburg physicists have successfully conducted such an experiment. This research might open up a new way of processing information. 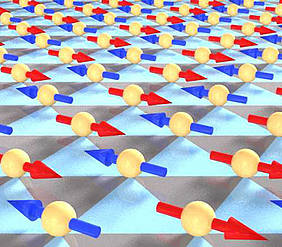 Take a small, thin silicon disk and deposit tin atoms on its surface in a regular pattern. Although both starting materials do not possess any magnetic properties, their combination induces a magnetic state – a surprising result. University of Würzburg physicists have succeeded in producing this effect experimentally. Their research is reported in the current issue of the prestigious journal Nature Communications.

According to Dr. Jörg Schäfer, the unexpected magnetism is attributable to "regularly ordered patterns of electron spin". Schäfer is a private lecturer at the Department for Experimental Physics IV of the University of Würzburg. Working in the study group of Professor Ralph Claessen, who heads the department, he was in charge of the decisive experiments; the theoretical simulation was conducted at the Department for Theoretical Physics I, headed by Professor Werner Hanke.

Spin: It is the intrinsic angular momentum of electrons. Electrons are electrically charged so that this rotation automatically creates a magnetic field. Thus, they are like tiny magnets. As a rule, however, this has no consequences: The enormous number of electrons that are present even in minute quantities of a substance and the fact that these "electron magnets" point randomly in all directions cause them to cancel out as a whole.

When atoms sense each other

The magnetic properties found by the Würzburg physicists in their experiments are due to a special reason: "The clever arrangement of individually deposited metal atoms gives rise to regularly ordered patterns of electron spin," Jörg Schäfer explains. After adsorption on the silicon substrate, each atom only possessed one electron together with its spin in the outermost orbital – a so-called valence electron. Such electrons were able to get in contact with a neighboring atom, which process can be pictured as electron hopping between the atoms. Only then is it possible for the electron spins to sense each other in their various positions and to align themselves accordingly.

However, there was yet another mystery for the physicists to solve: The metal atoms arranged themselves on the silicon substrate at evenly spaced distances in what is called a "triangular lattice" as the scientists found out in their experiments.

The problem of frustration

The problem: Nature tends to prefer a spin arrangement in which the spins of neighboring positions point in opposite directions," says Jörg Schäfer. But how is this supposed to work in a triangle – which spin should the third partner anti-align with? A seemingly insolvable problem, for which reason it is known as the "problem of frustration" in physics. After thorough examination, the scientists were able to determine how the problem was solved in their experiment: "The spins of the tin atoms arranged themselves on the silicon substrate in an unusual pattern with row-wise alternating spin orientation," Schäfer explains (see illustration).

According to Schäfer, this discovery of magnetic order essentially illustrates the astonishing possibilities opening up for the control of electrical interactions on an atomic scale. Our study thus suggests an approach for the implementation of spin-based information processing on the basis of well-established semiconductor materials, such as silicon, where the data are magnetically coded.

The experiment of the Würzburg researchers was conducted within the DFG-funded research unit FOR 1162 "Electron Correlation-Induced Phenomena in Surfaces and Interfaces with Tunable Interactions". The project involved a close collaboration between theoretical and experimental physicists: The atom lattice and the hopping processes of the electrons were modeled in complex computer simulations at the Department for Theoretical Physics I. The experiments were conducted at the Department for Experimental Physics IV.

The physicists gained insight into the spin arrangement by means of photoelectron spectroscopy. In this method, the ejection of electrons from the surface of a sample is induced by exposure to X-ray radiation and the properties of the emitted electrons are then analyzed. The required information on the magnetic order can be derived from their energy distribution and angular distribution," says Schäfer. Their behavior was also modeled in parallel in so-called many body calculations, where the spin pattern was directly factored in.

Both methods are in agreement with respect to the electron signals

The results of both variants surprised the scientists: Both methods showed corresponding patterns of signal intensity caused by a periodic spin arrangement. "A surprising result" in Schäfer's opinion – especially considering that only non-magnetic components were used in the experiment.