Platelets play a key role in strokes: They can even drive nerve cells in the brain into a kind of suicide mode, as scientists from the University of Würzburg now report in the journal "Blood". 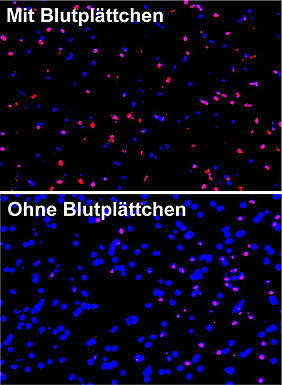 A stroke typically develops as follows: A blood vessel supplying the brain with vital oxygen and nutrients is blocked by a blood clot, resulting in nerve cell death. Signs and symptoms of a stroke can include inability to move and speech problems.

Platelets are a major constituent of these blood clots. They are small cell fragments that circulate in the blood vessels whose function is to stop bleeding and close wounds.

"Scientists have suspected platelets to play an important role in the development of strokes for quite some time. But their exact function was unknown until recently," says Professor Christoph Kleinschnitz, head of the Stroke Unit of the Department of Neurology of the Würzburg University Hospital.

Together with colleagues from Tübingen and Belgium, the Würzburg researchers have now closed this knowledge gap. What's special about their discovery: They found out that platelets are harmful in different phases of the stroke.

In the early phase, the platelets release a special clotting protein called the Von Willebrand factor. As the scientists report in the renowned journal "Blood", this factor promotes clotting in the brain and aggravates the brain damage after a stroke.

But platelets are equally significant in the later phase of a stroke. In a further article in "Blood", the research team demonstrates that the platelets subsequently travel from the vessels into the brain tissue where they can directly damage the nerve cells.

"The underlying mechanism is called apoptosis," explains Dr Peter Kraft from the Department of Neurology of the Würzburg University Hospital. This is a kind of suicide programme of the nerve cells. It is activated once the platelets come into contact with the nerve cells. The researchers have proved that platelets are capable of triggering apoptosis in the brain for the first time ever.

"In order to develop new targets for therapy, it is crucial to understand how platelets behave in the various stages of the stroke," Professor Kleinschnitz explains. "We are pinning our hopes on novel antibodies that are capable of suppressing the harmful function of the platelets." In animal models, these antibodies still work even when they are administered as late as one hour after the stroke.

Moreover, the antibodies can mitigate the nerve-damaging effect of the Von Willebrand factor. And they cause the nerve cells to go into suicide mode less frequently. "So antibodies could target different causes of stroke and be beneficial to many patients," Kleinschnitz says. Before translating into actual therapies, however, additional investigations and safety tests will have to be conducted.

Their research was funded by Deutsche Forschungsgemeinschaft (DFG) within the scope of the Würzburg Collaborative Research Center 688.