Würzburg researchers have identified a protein that is partly responsible for the death of nerve cells in the brain during a stroke. This will open up new possibilities in therapy. 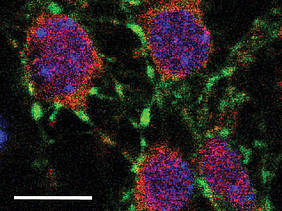 How do strokes occur? What tends to happen is that a clot blocks the blood vessels supplying the brain. The brain then becomes starved of blood and oxygen, as a consequence of which nerve cells start to die.

“A massive import of calcium ions into these nerve cells plays a major role in the death of the cells,” explains Professor Bernhard Nieswandt from the Rudolf Virchow Center for Experimental Biomedicine at the University of Würzburg. But the exact details of this process have been unclear, until now.

The regulation of the inflow of calcium into the nerve cells has always been something of a mystery. One possible calcium regulator is the sensor protein STIM1: in blood cells it measures the concentration of calcium. If the level is too low, it stimulates import. It was also suspected that STIM1 played a similar role for nerve cells.

However, contrary to prevailing assumptions, it is not STIM1 that opens the floodgates for calcium during cerebral ischemia. Responsibility lies instead with STIM2 – a related protein to which science has always attributed a more minor role. This is the report given by Bernhard Nieswandt with colleagues from Würzburg and Leipzig in the journal Science Signaling.

The research team discovered that nerve cells with no STIM2 survive an inadequate supply of blood or oxygen far more successfully than normal nerve cells. This evidence was obtained using cell cultures and mice. The areas of the brain left damaged by a stroke were reduced by more than half in the absence of STIM2.

What does this finding mean for stroke patients? Nothing yet. But it offers scientists a new starting point that they may be able to use to improve therapy and prevention.

“If the STIM2 protein can be blocked by a drug, this may alleviate the consequences of an ischemic stroke. Stroke patients often suffer paralyses as well as losses of sensation and impaired speech for which current therapies can only offer inadequate treatment,” explains Professor Guido Stoll from the Department of Neurology at the University of Würzburg.

As their next step, the researchers wish to investigate which calcium channels in the nerve cells are opened by STIM2 and how this process can be influenced using substances.

Scientists from Würzburg and Leipzig involved

The following scientists from the University of Würzburg were involved in the work: Alejandro Berna-Erro, Attila Braun, David Stegner, and Bernhard Nieswandt from the Rudolf Virchow Center for Experimental Biomedicine/DFG Research Center; Guido Stoll, Christoph Kleinschnitz, Michael Schuhmann, and Sven Meuth from the Department of Neurology; and Thomas Wultsch from the Department of Psychiatry. Also involved were Robert Kraft and Jens Eilers from the Institute of Physiology at the University of Leipzig.