The enzyme NOX4 is responsible for the death of nerve cells following a stroke. This discovery by researchers from the universities of Maastricht and Würzburg and from the Helmholtz Center in Munich offers new possibilities in therapy for a number of illnesses. 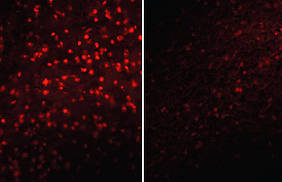 What makes the enzyme NOX4 so dangerous? It produces hydrogen peroxide – an aggressive molecule that is used, for example, as a bleaching agent or disinfectant. When the scientists paralyzed the enzyme in the animal model using a new inhibitor, the damage to the brain following a stroke was drastically reduced – even when the inhibitor was not administered until hours after the stroke.

The German-Dutch research team reports this finding in the new issue of the renowned journal Public Library of Science Biology (PLoS Biology). The team is led by pharmacologist Harald Schmidt (University of Maastricht) and stroke researcher Christoph Kleinschnitz from the Department of Neurology at the University of Würzburg.

Stroke, which is triggered by insufficient blood flow to the brain, is the second most common cause of death worldwide. Anyone who survives it is often left with permanent damage, such as paralysis or speech disorders.

Christoph Kleinschnitz: “To date, there is only one therapy and its effectiveness is relatively modest. What is more, it is only suitable for some ten percent of stroke patients. It involves dissolving clots in the brain to eliminate the blood circulation deficiency, but it carries the risk of brain hemorrhages.”

Preventing the production of hydrogen peroxide

There is evidently an urgent need for new therapies. The hydrogen peroxide formed after a stroke offers a good place to start. All attempts to inhibit the effect of this aggressive molecule using antioxidants have so far failed. “However, we are now pointing a new way forward because we are focusing on the root of the problem and are able to disable the enzyme NOX4 directly,” says Kleinschnitz.

Disabling the gene for NOX4 has not triggered any abnormal changes in mice, as established by researchers from the German Mouse Clinic at the Helmholtz Center in Munich. This observation might prove useful for the future development of NOX4 inhibitors with minimal side-effects.

Impetus for therapy for other illnesses

It is likely that hydrogen peroxide and related molecules also play a major role in other illnesses: heart attack, cancer, and Parkinson’s and Alzheimer’s diseases. For all these complaints, antioxidative therapies have been just as unsuccessful to date as they have been for strokes. Harald Schmidt is therefore expecting the new insights to provide fresh impetus for therapy for these diseases as well.

Application on patients is still a long way off, though. First, the scientists need to confirm the results in other disease models and to develop the active ingredient further as a drug.