Scientists at the Biocenter and from the Institute of Pharmacology at the University of Würzburg have discovered a gene in a species of fish that triggers puberty. People also carry this gene in their genetic make-up. In humans, it has been associated to date with regulating appetite and body weight. 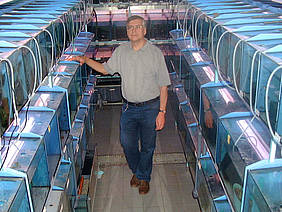 Adult male Swordtails (Xiphophorus) demonstrate astonishing differences: some are big and heavy; others, on the other hand, are small and light. And while those that are big defend their territory and seek to attract females with an elaborate courtship display, the small ones wander around, sneak up to fertile females, and rape them. They actually have no other option because the females clearly prefer bigger partners.

From an evolutionary point of view, it may be surprising that the smaller males have managed to this day to reproduce despite being rejected by potential female partners. The reason for this can be found elsewhere: how big a male Swordtail grows depends on when it enters puberty. This is because growth stops with the onset of puberty. So, the later the male becomes sexually mature, the bigger it ends up being. But this means that smaller males have more time to bring offspring into the world.

The search for the gene responsible

The cause of the different appearance and behavior of male Swordtails has been researched by a team led by Würzburg biochemist Manfred Schartl – though not from an evolutionary angle. Schartl is the Chairman of the Department of Physiological Chemistry I at the university; he has long been interested in the Swordtail from a molecular biological point of view. In their search for the trigger for this “polymorphism”, as biologists refer to it, the Würzburg team has now made a discovery: they have found the gene responsible on the sex chromosomes. The gene controls when a male Swordtail enters puberty.

“This gene can be found on both the X and the Y chromosomes in different forms,” says Manfred Schartl. It is the genetic make-up on the Y chromosome that determines the differences in male Swordtails. As for the females, it would seem that other rules apply, since they continue to grow for as long as they live.

In extremely simplified terms, there are two variants of the gene on the Y chromosome, which only males possess. These are responsible for the different manifestations of the male fish – or more accurately: the frequency with which copies of them are strung together on the chromosome. While one gene type produces transmitters that set processes in motion elsewhere in the body that end in sexual maturation, the other type turns out to be rather inactive.

“We suspect that these inactive alleles delay the onset of puberty by weakening the signal of the active alleles,” says Schartl. The more copies there are of them, the longer it takes for the transmitters of the active genes to reach a certain threshold value and for the process to start.

For the scientists this discovery is important mainly for one reason: “For the first time, we have found a gene that is responsible for a polymorphism within a species,” explains Schartl. In this case, this means that there is one gene that controls the different appearance and behavior of the Swordtail fish.

The role played by the gene in humans

However, this gene is also interesting for another reason: people also carry it in their genetic make-up; in humans, as in mammals generally, the gene is found in the area of the hypothalamus. There it plays a part in regulating energy balance; it influences appetite, food intake, and ultimately body weight. Schartl’s discovery is now arousing the suspicion that this gene might also in some way influence the start or end of puberty in humans.

A molecular biological link between puberty, appetite, and body weight is not unlikely. After all, anorexic girls are well aware that they will be late entering puberty or that their periods will stop temporarily. “So, there is some evidence to suggest that a biochemical link exists between these systems,” says Schartl.

No direct link to anorexia

It is not, however, possible to draw the conclusion that a genetic defect is the trigger for anorexia, according to Schartl. “Obviously, anorexia is not caused by a single gene; it is usually triggered by psychological factors.” However, given that there is never one gene solely responsible in such complex control circuits, instead there are always large gene networks with many components involved, it is conceivable that faults in different places still lead to the same problems.

How did Manfred Schartl come to be interested in this particular gene? Not by chance. Schartl normally works with Swordtails because they make a good model for researching the molecular biological mechanisms that are responsible for the development of skin cancer. The gene that plays a pivotal role in this lies just next to the one that has now been discovered.