Ultrafast operation and high performance: This is what is expected of quantum computers. But there are still some obstacles to the technical implementation of this new type of computer. Physicists of the University of Würzburg report on their progress in this research area in "Nature Photonics". 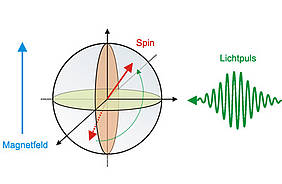 "For the design of quantum computers, you need good quantum bits as information carriers," says physicist Martin Kamp. So what constitutes a good quantum bit? It must be able to assume several physical states which can be manipulated at will and last as long as possible.

Scientists around the world adopt a variety of different methods in order to obtain such building blocks of quantum computers. The Würzburg physicists and their cooperation partners in Japan and the United States focus their research on semiconductor nanostructures, called quantum dots. These solid state systems have the advantage of providing the possibility to integrate several quantum bits on one chip.

In the examined structures, each quantum dot contains an additional electron, whose so-called spin represents a quantum bit. In simplified terms, the spin corresponds to the intrinsic rotation of the electrons, which can be symbolically represented by means of an arrow. The quantum dots are located in a magnetic field, which defines a reference axis for the arrow. If the arrow points along this axis in one of two possible directions, the corresponding bit is classical in nature, i.e. of the type used by today's computers. In case of a quantum bit, however, all orientations in relation to the reference axis are relevant. Therefore, quantum bits can encode more information than classical bits, but they are also more susceptible to interferences that might lead to a change in orientation.

In the current edition of the scientific journal "Nature Photonics", the Würzburg physicists describe several possibilities to manipulate the orientation of a spin-state. "With optical pulses, you can set the spin to a clearly defined position," explains Sven Höfling of the Physics Department. However, the desired state is not of long duration; due to the interaction of the spin with the environment of the quantum dot, the information encoded in an individual spin state usually is lost within a matter of nanoseconds (billionths of a second). The task of overcoming this effect is considered to be one of the biggest challenges in the development of quantum computers.

Longer life-time of the desired spin-state

With a sophisticated method, the physicists have succeeded in significantly extending the life-time of the previously set spin state: They managed to keep it stable for several microseconds (millionths of a second). "Within this time frame, you can perform 100,000 operations on a quantum bit, which is quite acceptable for application in quantum computers," says Martin Kamp. This is possible because the use of ultra-short optical pulses allows an extremely fast manipulation of the spin states in the quantum dots.

"Our research shows that the individual spin quantum bits have a great potential for application in quantum computers or in cryptography as quantum memory elements for secure data transfer," the scientists conclude.

Interconnection of spin quantum bits as the next objective

The next objective of the physicists: to interconnect several quantum bits. In this process, they also intend to integrate the quantum bits in photonic networks, where signals are transmitted by means of optical pulses. The fact that these spin quantum bits can be integrated in such circuits is deemed to be of advantage for the further development of this technology.