Short circuit in the nerve cells

With diseases such as multiple sclerosis, cells of the immune system attack nerve cells in the brain and spinal cord. Scientists from the University of Würzburg have now managed to observe and describe this attack in detail. 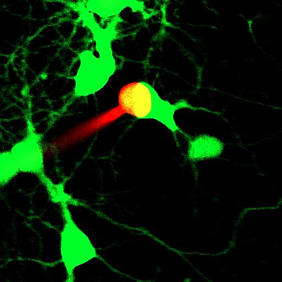 The principle is always the same: cells of the immune system, which are actually supposed to combat foreign pathogens, migrate to the brain and spinal cord and attack nerve cells there. The best-known example of an autoimmune disease of this nature is probably multiple sclerosis. The immune cells, known as T cells, destroy the insulating layer of the nerve cells and cause chronic inflammations that are scattered all over the central nervous system.

Professor Heinz Wiendl and Dr. Sven Meuth from the research group “Multiple Sclerosis and Neuroimmunology” at the University of Würzburg have now succeeded in observing the way in which these cells go about their destructive work. “We have managed to display and functionally characterize the interaction between individual immune cells and insulated nerve cells,” says Heinz Wiendl. For this purpose, the scientists combined a special time-lapse microscopy technique with real-time high-resolution electrophysiological techniques.

After the short circuit comes recovery or death

The results of these observations came as a surprise to even the scientists themselves: “Under the corresponding experimental conditions, T cells seek out their target cell and attack it,” explains Sven Meuth. This triggers a kind of electrical short circuit in the nerve cell, causing it to lose its capacity to function. There are then two possible outcomes: either the cell recovers from this attack and starts working again normally, or it dies.

Responsibility for this lies with two substances that are released by the T cells during their attack: the molecule perforin, which causes an increase in calcium ions in the nerve cells and thereby changes the electrical properties of the cells, and the enzyme granzyme B, which appears to make a major contribution to the death of the nerve cells.

Reaction in a matter of seconds

“This work has revealed for the first time how T cells seek out nerve cells in the central nervous system, identify them and interact with them,” says Heinz Wiendl. What is new and surprising was the discovery that nerve cells are “shut down” electrically very quickly in no more than a few seconds after contact with the T cells, with consequences for both the individual cell and the entire network.

The core findings in this work were made by Alexander Herrmann and Ole Simon, who familiarized themselves with the new techniques while studying for their doctorates. Collaborative ventures were also established with the Institutes of Physiology at the Universities of Münster and Magdeburg as well as with Charité Berlin. The research was funded by Würzburg Special Research Area 581 as well as the Interdisciplinary Center of Clinical Research (IZKF) at the University Hospital.