Computers with no need of cooling? They haven’t come into existence yet. However, physicists of the University of Würzburg are paving the way for them: In the American scientific journal “Science”, the researchers now present a semiconductor that transmits electric current without heating up in the process. 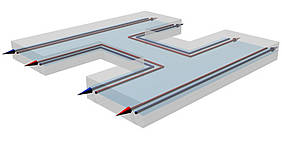 This new type of semiconductor consists of mercury telluride and mercury cadmium telluride. In a sophisticated procedure, the Würzburg physicists apply these two materials to penny-sized crystal wafers in alternate ultra-thin layers. “The individual layers are only seven to ten nanometers thin,” says Professor Laurens Molenkamp. In other words, inconceivably fine: A nanometer is one millionth of a millimeter.

In order to analyze the conductivity of the layered material, the physicists structured its surface, using lithographic patterning methods. They sort of created tiny wires in a specific pattern, e.g. an H-shaped structure.

“The material was expected to become an insulator under certain conditions – at very low temperatures, for instance. All conventional semiconductors exhibit this behavior,” explains Professor Hartmut Buhmann, who works in Molenkamp’s team.

Material reacted in an unexpected way

The physicists were in for a surprise, when the material behaved differently: The electrons concentrated at the edges of the H-shaped structure. In addition to this, they were freely moveable there – without any resistance and thus without dissipating heat. According to the physicists, this characteristic is based wholly on the materials and the way they are layered. The form of the structure – whether H or X – is irrelevant.

Not yet ready for application

This new type of semiconductor is not yet ready for real-world applications, though. The effect described above occurs only at extremely low temperatures below minus 170 degrees Celsius. Therefore, the Würzburg researchers now intend to develop other materials, which produce the same effect at significantly higher temperatures.

“We are going to use bismuth compounds for this purpose,” says Laurens Molenkamp. However, they first have to work out a procedure allowing them to stack these materials as well in neat wafer-thin layers.

To stay cool is important for computers

When computers are processing, they heat up. But if temperatures get too high, the function of computer chips is adversely affected, which means they need cooling. The cooling is provided by fans on board the PC or by air conditioning systems in large computer rooms. Some high-performance computers of today are already equipped with water-cooling systems.

So heat is a factor that considerably limits the development of faster computers. This is because more and more transistors, working ever faster, have to be tightly packed on the chips in order to reach higher levels of performance. “Consequently, a higher amount of electric current passes through the chips, inducing an increased heat build-up in the components,” explains Hartmut Buhmann. Hence, the advent of components that conduct electric current without generating heat would be likely to give a big push to the evolution of computers.