Salinisation: a call for new approaches in plant breeding

The progressive salinisation of soils is becoming increasingly problematic for farming, jeopardising the supply of a growing world population. Scientists from Germany and Australia are sounding alarm over this development, calling for new efforts to breed salt-tolerant crops. 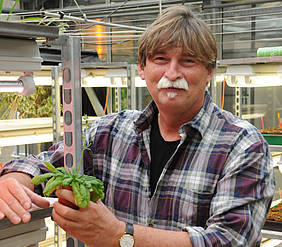 Salinisation destroys three hectares of arable land every minute – irrevocably in most cases. And where cultivation is still possible on salt-affected fields, yields are declining rapidly. This trend significantly compromises the goal of feeding an estimated world population of 9.3 billion in the year 2030.

In the latest issue of Cell Press Journal Trends in Plant Sciences, scientists from Australia and Germany are therefore demanding new efforts to be made in the breeding of salt-tolerant plants. Unfortunately, decades of plant breeding for salinity tolerance have not resulted in a major breakthrough, so the scientists are suggesting a new approach. One of them is professor Rainer Hedrich – the Würzburg biophysicist is a renowned expert in plant transport processes.

Professor Hedrich, in the Cell journal article you and your colleagues Sergey Shabala and Jayakumar Bose from the University of Tasmania in Australia, advocate the model of special plants that thrive in a saline environment. What exactly do you mean by that? We suggest that we should learn from nature and do what halophytes, or naturally salt-loving plants, are doing: taking up salt but depositing it in a safe place — external balloon-like structures called salt bladders.

How is that supposed to work? Basically, this "merely" requires the proper genes to be inserted into traditional crops. The plants will then develop the above salt bladders which provide salt excretion mechanisms without any notable impact on growth and yield.

This sounds a bit like science fiction. What are the specific steps? The sugar beet genome, for instance, was recently sequenced. It belongs to a plant family that includes bladder cell carrying halophytes and which is also a distant relative of the grain crop quinoa. Now if you grow quinoa plants both in a high-salinity and low-salinity environment and afterwards compare the profile of the genes operating in the bladder cells, you learn which genes are relevant for the transporter mechanisms. And that is the main task: to identify the mechanisms used by plants to excrete salt to external storage organs.

And then you want to introduce these genes into other plants? We insert or activate them, to be precise, when they are still sleeping in the background of crops. Once the molecular mechanisms of the salt transport systems into the salt bladders have been identified, crop breeders can use them to enable traditional grain crops such as wheat or barley to sequester the salt away from the photosynthetically active and salt-sensitive plant tissues. This could open up a new way of breeding crops towards grain species with high salt tolerance.

That is all? Not exactly: We must also get these plants to develop bladder cells. That is difficult, albeit not impossible. Bladder cells are specialised leaf hairs (trichomes) which are common to many plants. We already know the individual steps of trichome development from the model plant Arabidopsis thaliana. In cooperation with experts in trichome development, you then look for mutants in which the switch in the quinoa genome for the development of the trichome precursor to a bladder cell is inactive. The idea is to transfer these genes to salt-sensitive plants to enable them to secrete salt from the leaf when exposed to high salt concentrations.

Which plants could be modified in this way? Basically, this can be applied to all plants. But you need to know that there are plant types that do not have trichomes because they are lacking a specific transcription factor.  When inserting this gene, they, too, will develop trichomes. We could proceed analogously with the genes specific to bladder formation to make "normal" plants salt-resistant.

How long will it take until the first modified plants will be growing on the fields? The researcher is somewhat reluctant to answer such questions. With the right equipment, it will take approximately a year in the lab to identify the genes with higher salt-induced expression. After two more years, all stages should have been sufficiently studied to know the key genes involved in the development of the salt storage bladders. I think it will be rather easy to produce trichomes. The redifferentiation of trichomes into bladder cells capable of salt storage will be the trickiest step. I would expect our pilot project, which is designed to equip sugar beet, for example, with bladders similar to quinoa, to yield test plants in the green house after around three years.

Will such plants solve the problem of salt-affected soils? No, of course the salt will not simply disappear. But it would allow us to grow crops such as quinoa, which have been salt-intolerant so far, on tolerably saline soils and obtain yield. The alternative at present is that nothing whatsoever will grow there that delivers yield for human food.

Artificial irrigation in regions with little precipitation is the main cause of soil degradation: The salts in the water do not evaporate but accumulate in the soil. Heavy irrigation can also result in groundwater rising to the surface, dissolving the salts and then depositing them in the soil. But even stopping irrigation does not protect against salinisation everywhere. If forests are turned into farmland in regions with little precipitation, salts can reach the surface soil with the rising water table.

How plants deal with saline environments

In the course of evolution, plants have developed different methods to survive in saline habitats. Mangroves, for instance, feature salt glands that allow them to secrete salts. However, this process comes with a high energy cost. The majority of plants have developed a different way to excrete salt. The so-called "excluders", which are exposed to low salt concentrations only, actively exclude sodium and chloride ions through their roots. Succulents have internal vacuoles in which they can store small quantities of salt. And then there are plants which are capable of storing great amounts of salt in external balloon-like structures allowing them to sequester the salt away from metabolically active parts. These bladders are nearly ten times the diameter of epidermal cells. Accordingly, their storage volume is 1000 times greater allowing them to take up 1000 times more salt than normal leaf cell vacuoles. 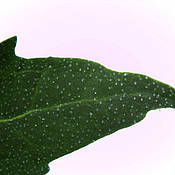 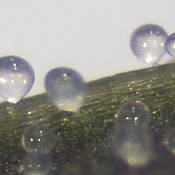