What role do light-sensitive proteins play in a fungus that attacks rice plants? Researchers from Würzburg and Seville have answered this question: the proteins retard the germination of the fungal spores. 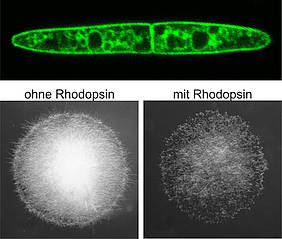 Fusarium fujikuroi: This is the name of a fungus that infects rice plants. It spreads through their tissues, makes their stems long and weak, and, in the worst-case scenario, kills them. If the plants survive this attack from the parasite, they do not yield a full harvest: it may be up to 20 percent smaller, as the International Rice Research Institute (in the Philippines) has found.

The fungus attacks the rice via the grains or roots. If its spores reach there, they germinate and push fine tubes into the plant interior. Spore germination depends greatly on the protein CarO (carotenoid opsin), which belongs to the group of rhodopsins. This is reported by researchers from the University of Würzburg’s Biocenter and from the University of Seville in “Scientific Reports”, a journal by the Nature Group.

Describing the role of a fungal rhodopsin for the first time

Rhodopsins are found in all fungi that grow on plants. “Until now, however, nobody knew what biological functions they fulfil,” says Würzburg scientist Ulrich Terpitz. His junior research group at the Department of Biotechnology and Biophysics has now shed light on this matter for the first time. It has discovered with the fungus Fusarium fujikuroi that the CarO rhodopsin accumulates particularly strongly in the spores. It is activated by light and then acts as an ion pump that transports protons out from the fungal cell.

When the researchers examined fungi mutants lacking the rhodopsin, they found that the spores of such fungi germinate far more quickly than normal in the presence of light. “Light activates the rhodopsin, and this in turn retards the germination,” explains Terpitz.

This makes sense for the fungus: “The spores are created in the light, on the leaves of the rice plants. But they should not germinate until they are in dark soil because there they are close to the infection sites, by the roots, or fallen rice grains.” Presumably the CarO rhodopsin therefore helps prevent germination of the spores until they have reached the soil, says the Würzburg biologist.

As the next step, the researchers want to try to infect rice plants in the laboratory with rhodopsin-free fungal spores – to see whether the rhodopsin can affect the infectivity of the fungi. They are also planning to examine the rhodopsins of another fungus, corn smut (Ustilago maydis). In this pathogen there are two other rhodopsins alongside CarO. “We are also keen to take a very close look at their role as proton pumps and their positioning in the fungus,” says Terpitz.

This work is funded by the German Research Foundation (DFG).

Rhodopsins are only one group of light-sensitive proteins known in fungi. There is particular uncertainty regarding their role. The other light receptors, on the other hand, have been well researched. They are known to control many vital processes, such as the direction of growth of the hyphae, circadian rhythms, or spore formation.