An ion channel that plants use to protect themselves against drying out has been discovered by Würzburg and Zurich researchers. What is special about it is that it functions in a similar way to the ion channels found in people and animals. 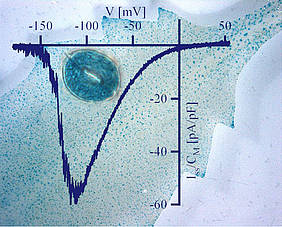 The skin of plants has tiny pores. These allow carbon dioxide into the leaves for photosynthesis and at the same time enable water to escape into the environment. It is therefore very important for plants to regulate these pores optimally: during times of drought, water loss needs to be minimized while still preserving a sufficient inflow of carbon dioxide.

The pores each consist of two guard cells: if these are bulging with ions and water, a gap forms between them and the pore opens. When the cells go limp, the pore closes. How does this work? In simple terms, like so: at a signal from outside, channels in the wall of the guard cells open, and ions flow out through them. As a consequence, the guard cells also expel water and become limp, causing the pore between the two guard cells to contract.

Publication in “The Plant Journal”

There are various channels through which ions leave cells. A slow-acting channel type had already been identified; details of a fast-opening channel type are now being presented in the journal “The Plant Journal” for the first time.

This channel was discovered by teams led by Professor Rainer Hedrich (Department of Molecular Plant Physiology and Biophysics at the University of Würzburg) and Professor Enrico Martinoia (Institute of Plant Biology at the University of Zurich). A group of the world’s leading plant researchers, the “Faculty of 1000”, has classified their work as especially worth reading.

Mutant as the starting point

How did they come to find evidence of this quick channel? During his research, Martinoia, who used to work at Würzburg University, became aware of a mutant of the model plant Arabidopsis: it is no longer able to optimally adjust the pores in its leaves to the concentration of carbon dioxide. Martinoia turned to the guard cell expert Hedrich, wishing to work with him to find out more about the genetic defect.

Hedrich: “It turned out that the defect concerns an ion channel in the guard cells that reacts sensitively to malate.” Malate is the anion of malic acid and an important compound not just in plant metabolism. For the guard cells it has a special signaling function: if photosynthetically active cells cannot process any more carbon dioxide – because it is getting dark, for example – they release malate. In doing so, they signal to the guard cells that they can close the pores to conserve water. “

This means that plants use the malate sensor of the previously unknown channel to adjust pore width to the photosynthetic capability of the leaf cells,” explains the Würzburg professor, who is world-renowned as an expert in ion channels in plants. Arabidopsis plants in which this channel is defective are no longer able to achieve this regulation. Their pores remain open even with a high concentration of malate and even when the stress hormone abscisic acid reports a water shortage.

After Martinoia’s team had detected the defective gene in the Arabidopsis mutant, it was cloned in Würzburg and inserted into eggs of the Xenopus frog. Within two days the millimeter-sized egg cells had produced so many plant channels and integrated them into their membranes that the scientists, using electrophysiological measurements, were able to characterize the channel type whose loss is responsible for the failing of the mutant guard cells.

Ion channels play a role not just in plants, but also in the transmission of the electrical excitation in nerve and muscle cells in animals. According to Hedrich, the newly identified plant channel enjoys a special status here: “When malate bonds to it, it opens even at resting potential and temporarily depolarizes the membrane.” The plant channel therefore exhibits a similar electrical behavior to that of sodium channels in the nerve cells of humans and animals.

“The task now is to understand why the two channels are able to be so similar functionally,” says Hedrich: How can such different genes establish a common function? How do the channels measure the electrical field? How does this guard cell channel allow anions and even, preferably, malate to pass through? What does the malate switch for the plant channel look like? These are the questions that the scientists wish to tackle next.