In a discovery of potentially burning interest to computer and chip manufacturers, physicists at Würzburg University have demonstrated a previous unknown quantum effect – and this could be a big step forward in the development of new, cool computer technologies. The researchers have published their findings in the latest issue of Science, in a joint publication with theoretical physicist from Stanford University. 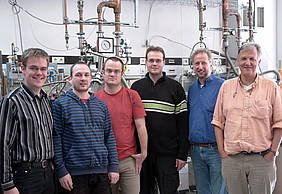 Most laptop users notice it skin deep: when you place your mobile companion on your lap and go surfing the internet for a while, the computer gets really warm. For the average user this may not seem such a big deal. But heating really poses a problem for the semiconductor industry, because heat development severely limits the development of future generations of chips – and thus of laptops, and PC’s in general.

The market demands ever improving performance from chips and computer. To satisfy this demand, more and more transistors must be crammed into the same surface area, and when an electrical current it applied to these transistors, they produce considerable heat. “To increase the speed of a computer, one must increase the amount of current flowing through its chips, thus increasing the side effect of heating” explains Prof. Hartmut Buhmann, responsible for the team conducting the research. “This may bring about so much heat that temperature becomes the limiting factor in performance.” Actually, high performance computers already today use water cooling to deal with this issue.

“The techniques that we have recently discovered here in Wuerzburg could alleviate the issue of chips overheating” says Prof. Laurens W. Molenkamp, head of the chair for experimental physics III: “Using the quantum spin Hall effect which we for the first time have demonstrated here, it is possible to transport and manipulate information without energy loss.” This means that a future computer could operate extremely fast without losing its cool!

For discoveries in this vein, Wuerzburg University appears to be the place to be. 25 years earlier, at the same chair, then headed by Gottfried Landwehr, Klaus von Klitzing made the discovery of the (charge) quantum Hall effect, which determines the Hall resistance of a semiconductor field effect transistor in a strong magnetic field, and for which he was awarded the Nobel prize for physics in 1985.