With the selection and decoration of further excellence scholars and the creation and deepening of contacts to important cooperation partners the collaboration of the University of Kinshasa in the Democratic Republic of the Congo with the University of Würzburg in Germany has been extended. 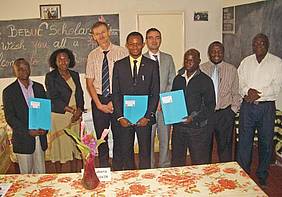 By the scholarship system BEBUC, initiated by the natural products chemist Gerhard Bringmann from Würzburg and his Congolese colleague Virima Mudogo, outstanding students of the University of Kinshasa are being supported. For the first time there are now scholars in all four phases of the academic career: in the bachelor and in the master studies, in the PhD thesis, and, decisively, in the phase of the re-entry into the Congo.

During his recent trip to the Congo, Bringmann has now chaired the selection of further scholars. Further members of the Selection Committee were Dr. Karine Ndjoko from the University of Geneva and the Congolese professors Virima Mudogo (an Alumnus of the University of Würzburg), and Mathieu Bokolo, and further, non-permanent members of the Committee. The scholarship certificates were donated in a little ceremony, which was also attended by Mr. Alexander Roth from the German embassy in Kinshasa.

In contrast to bachelor scholars, the master scholarship candidates do not only have to qualify themselves by excellent study results, but, in particular, by a future-oriented study and research plan. The master studies shall, if any possible, be done at an excellent African university. As an alternative, a 'sandwich program' can be chosen: the study as such will then be done in Kinshasa, the master thesis at a high-ranking university in Europe, America, or Asia.

Moreover, the candidates for a master scholarship also have to submit first plans for their PhD thesis, for the return into the Congo, and for their visions in research and teaching. This concept shall strengthen the Congolese and African identity, it shall 'guarantee' a high re-entry rate into the Congo after the studies abroad, and, shall thus, contribute to the renewal of the academic staff and to the reconstruction in the Congo.

Master Scholar for the University of Würzburg

One of the new master scholars is Dieudonné Tshitenge Tshitenge, an outstanding student of pharmacy, who wants to do his experimental work at the University of Würzburg in the research group of Prof. Bringmann. He will work on the analysis and evaluation of antimalarial remedies from traditional medicine of the Congo.

For the first time, the Committee also selected a re-entry scholar, Dr. Shetonde Oscar Mihigo. He studied in Kinshasa (bachelor) and in Gaborone in Botswana (master) and also performed his PhD thesis there. With the support for his re-entry into the Congo, the 'pipeline' of the BEBUC scholarship system becomes complete for the first time: the support for academic careers by bachelor, master, and PhD scholars, and by the re-entry scholarship.

Dr. Mihigo immediately proved that he really deserves the re-entry scholarship: During the pan-African Natural Products Symposium in Nairobi, during the week after the donation, he got the award for the best scientific talk of a young scientist.

Support by the Prime Minister and the Economy of the Congo

Likewise strengthened has been the 'environment' of the meanwhile so successful and presumably world-wide unique scholarship system. Gerhard Bringmann, Karine Ndjoko, Virima Mudogo, and Mathieu Bokolo presented the program to Prof. Daniel Mukoko Samba, the Directeur du Cabinet Adjoint of the Prime Minister. As already the Prime Minister himself, he also promised his support.

With Prof. Mukoko Samba's help the scientists got the opportunity to present the scholarship system at the Federation of the Congolese Enterprises, the FEC (Fédération des Entreprises du Congo). The scholarships shall not only strengthen the universities, but also the economy, the administration, and the entire infrastructure of the country.

At the FEC there was a very positive echo, and BEBUC was invited to collaborate as an institutional member. At the same time, the federation offered help for the incorporation of scholars within industrial courses, with the support of the scientists returning to the Congo, and for a joint initiative for support by the World Bank.

Contacts to the Medical Control Office and to DNDi

Intense contact was further built up to the drug control authorities of the Congo, the OCC (Office Congolais de Contrôle), which will support research work like that of D. Tshitenge Tshitenge.

"For a country like the Congo the reliable analysis and control of medical drugs is an important precondition for an improved health supply", says Bringmann.

Furthermore there was a first orienting meeting with representatives of DNDi (Drugs for Neglected Diseases Initiative), which presently performs clinical studies in the field of African sleeping sickness. It is planned that some of the scholars from medicine will perform their master theses there.

World Summit of Francophonie 2012 in Kinshasa

A first contact has likewise been generated with Prof. Isidore Ndaywel E Nziem, who will organize the World Summit of Francophonie, the association of French speaking countries, in Kinshasa in 2012. It was suggested that Gerhard Bringmann and his colleagues might present the new scholarship system there.

Extension to all Congolese Universities?

Particularly encouraging was the visit with the Minister of Education, Professor Léonard N. Mashako Mamba. He thanked the team of scientists for the successful work for the new scholarship system and asked them to open this future-oriented program soon to all Congolese universities. He will start a call to all universities and will support this initiative in all respects.

Meeting at the German Embassy and further Plans

Further activities are planned. Thus, the German embassador in Kinshasa, Dr. Peter-Christof Blomeyer, intends to invite leading representatives of economy, politics, culture, and universities to a joint meeting, at which Bringmann and his colleagues shall present the scholarship system.

At the same time the network is further built up, also externally. With the University of KwaZulu-Natal in Pietermaritzburg near Durban (South Africa) a first contracted University-University cooperation shall be established. It shall be the basis for future master scholars from Kinshasa to do their studies at KwaZulu Natal. 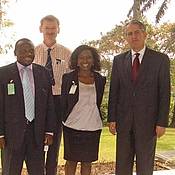 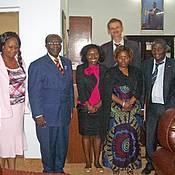 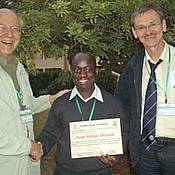 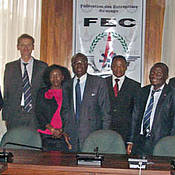