All over the world, researchers are working on new treatments for osteoporosis. One potential target is a protein whose structures have now been decoded in detail by scientists from the University of Würzburg. The scientific journal Plos One covers their work in its latest issue. 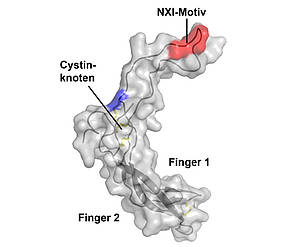 One in three women and one in five men in the world over the age of 50 currently have excessively low bone density according to the International Osteoporosis Foundation. They therefore carry a significantly increased risk of suffering a bone fracture. The pathological decrease in the density of bone substance, also known as osteoporosis, often develops unnoticed. In healthy people, bone-building and bone-degrading processes occur in equilibrium, whereas degradation predominates in osteoporosis patients.

Sights set on the protein sclerostin

It is no wonder that scientists and pharmaceutical companies are working hard to develop new treatments for osteoporosis. One possible target is the protein sclerostin, which plays a pivotal role in what happens inside bones. “Sclerostin inhibits an important signaling pathway found in bone cells,” explains Professor Thomas Müller. The structural biologist from the Julius von Sachs Institute at the University of Würzburg has spent a long time working with this protein. In 2009, for example, he managed to decode its three-dimensional structure.

Müller was able to show that the protein is composed of three loops that emanate from a central knot. The first and third loops together form a defined structure, while the second loop is highly flexible. “The latter region in particular appears to be primarily responsible for the bone growth inhibitory effect,” says Müller.

Sclerostin acts on the so-called Wnt signaling pathway in the body. This pathway plays a major role in ensuring that bone tissue remains stable. “Wnt proteins form a complex with two types of receptor at the cell surface; this then activates genes that are important for bone growth,” explains Müller. Sclerostin intervenes in this process and, in so doing, prevents activation of the Wnt signaling pathway, thereby generally inhibiting bone growth. “So, if we can block sclerostin using antibodies, for example, it will be possible to restore bone density even in already advanced osteoporosis,” says the scientist.

Now Thomas Müller and his team have succeeded in determining the structures in the sclerostin loop structure that are important for binding the protein to its receptor. Their achievement is reported on in the latest issue of the scientific journal Plos One. In addition, the team has shown that a change to the central knot also inhibits sclerostin. “Our studies reveal that the architecture of sclerostin is also important to the biological activity of the protein,” says Müller.

Building on these results, the scientists have already been able to develop an antibody that neutralizes sclerostin in collaboration with the company AbD Serotec. Its impact on bone growth is currently being examined.

This new knowledge concerning the way in which sclerostin works is not just useful for developing a treatment for osteoporosis. It is also conceivable that it may be helpful in the reverse direction, so to speak, namely for treating the bone diseases sclerosteosis and Van Buchem’s syndrome. “People afflicted by these very rare hereditary diseases form too little sclerostin or none at all and therefore suffer from excessive bone growth,” says Müller. In these patients, the bone mass grows so much that it wreaks nerve damage. Since the skull is also affected, loss of sight and hearing are common consequences in the absence of surgery; in extreme cases, excessive intracranial pressure can even lead to death.

With the new findings that show which areas of sclerostin are responsible for its effect and how these must be structured, scientists can now also design peptides that have a sclerostin-like effect, explains Müller. A “minimized” peptide-based sclerostin could represent a new, non-surgical treatment option for sclerosteosis and Van Buchem patients that would significantly improve their quality of life.