One year in space

UWE-3, the satellite developed by the University of Würzburg, is a technical marvel: On November 21, it has been in space for exactly a year – and it is still functioning perfectly. This is an extraordinary feat given the harsh conditions in outer space. 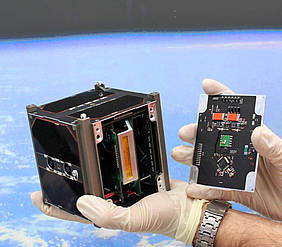 UWE-3 is one of a new generation of experimental satellites developed by the University of Würzburg (short: UWE): This mini-satellite is even more compact and efficient than its predecessors. Since 21 November 2013, UWE-3 has orbited Earth at an altitude of 600 kilometres. The cube, which weighs around a kilogramme and has an edge length of ten centimetres, was designed and built by Würzburg students, in particular by members of the SpaceMaster programme as well as doctoral candidates.

The satellite's on-board data processing system has been working non-stop for a year now – "and that despite the fact that it has undoubtedly been exposed to very strong cosmic radiation," says Klaus Schilling, professor of computer science at the department where UWE-3 was developed.

Radiation-tolerant thanks to software

Consisting solely of commercial components which are not radiation-hardened, the satellite's uninterrupted one-year operation is made possible by an advanced fault analysis and correction programme. "This 'software-based radiation tolerance' is an innovative approach to implement highly reliable data processing systems on Earth as well," Schilling explains.

Most other mini-satellites that were launched into space in 2013 on the same rocket as UWE-3 have already failed or accomplished their tasks with major interruptions only.

UWE-3 a product of international cooperation

The UWE-3 project has opened up interesting perspectives in international cooperation for the Würzburg scientists such as, for example, with aeronautics university associations worldwide like UNISECglobal and the Space University Advisory Committee.

The collaboration with the global community of amateur radio operators (AMSAT) has been particularly fruitful. At first, the amateur radio operators e-mailed the telemetry data to Würzburg - today, however, they are streaming the data live into the Würzburg database over the Internet. "As a result, our database has grown by more than 65,000 additional data records from all over the world," Schilling further.

What are the satellite's tasks?

The UWE platform has allowed the Würzburg team to successfully demonstrate a highly miniaturised on-board position detection and control system for the first time. The system determines the satellite's orientation based on data collected by gyroscopes, magnetometers and solar sensors with an accuracy of a few degrees. Like a compass it aligns with Earth's magnetic field in a highly efficient process that uses magnetic field coils.

In combination with a very small reaction wheel, the computer scientists were able to perform numerous experiments on satellite alignment control using different software variants. According to their forecast, the results will be significant for later observations of Earth's surface through mini-satellites.

The software functions also allow the intensity and the global distribution of malfunctions in the frequently used UHF frequency band to be characterised with greater accuracy in order to further improve the communication link for future UWE missions.

Having successfully completed the experiments in orbit, UWE-3 will continue its operation beyond the originally planned mission duration of three months with new goals – thanks to an extensive expansion of the on-board software programmed from Earth.

This was possible due to the redundant design of the microprocessor system for on-board data processing which allowed the Würzburg team to install software updates without jeopardising the running operation. Additional software expansions for the Würzburg satellite are planned for 2015 – and the scientists are confident that the small machine will continue to run smoothly until then.