Some T cells of the immune system are natural enemies of cancer cells. How they are prepared for their deployment in the organism appears to be very decisive in determining their effectiveness in cancer treatment. 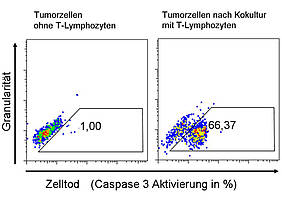 Many T cells of the immune system have the general ability to identify and destroy tumor cells. For this reason, medical scientists are trying to use the powers of T cells in cancer treatment. Many research institutions worldwide are working on such immunotherapies and the University of Würzburg also has some projects in this field.

Matthias Wölfl, senior physician at the Department of Pediatrics of the University Hospital, is one of the Würzburg T cell experts. Working as a postdoctoral researcher in the USA, he participated until 2007 in a project that explored the use of T cells against leukemia. The promising results of the project are now published in the prestigious journal "Science Translational Medicine".

What has been done in the project in the United States? "Every human organism possesses so-called WT1-reactive T cells with the ability to fight certain types of leukemia," Wölfl explains. Unfortunately, these cells exist in the body only in minute quantities: Among a million T cells, you will find no more than ten of the desired candidates.

Therefore, they must first be "fished" out of the blood and activated in the laboratory so that they divide and multiply if they are to be used for treatment. After a process of two months' duration, there are finally enough T cells available for preparing a highly concentrated infusion for the patients.

Surprise after 15 years of work

For a period of three years, Wölfl was involved in this major project of the Fred Hutchinson Cancer Research Center in Seattle. In total, however, the results published now are based on 15 years of research. And there is a surprise in store: "The way in which the T cells are activated in the laboratory appears to play quite a decisive role in determining their therapeutic effect," says Wölfl.

What the researchers found out: If the T cells come into contact with the messenger substance interleukin 21 during their activation, they are far more durable later on, which prolongs their activity against cancer. They could be detected in the blood of the patients for up to one year. If the interleukin was missing during activation, by contrast, they vanished after less than four weeks.

Patients with a high risk of relapse

The T cells were tested in eleven adult patients in the USA. All of them had already undergone the usual leukemia treatments and they started out in a difficult situation: All of them had previously even received stem cell transplants and they all had a high risk of relapse.

"Under these conditions, it is already a success that the treatment had an effect on the malignant cells in some of the patients. Three patients even survived for longer than two years free of leukemia," says Wölfl.

Only eleven patients and no control group? "The study was set up as a phase I/II trial, which is at the start of any drug development. The efficacy issue should not be raised at this point, because you need far more patients undergoing such treatment in order to decide on its effectiveness," Wölfl explains. Nevertheless, the study yields valuable insights about the biological behavior of the T cells and their application safety. Furthermore, it shows that this type of immunotherapy represents a promising approach for successful treatments.

"Generally, T cells cannot be more than an additional element of cancer treatment," Wölfl points out. Their application should be considered for patients in whom the number of cancer cells has been drastically reduced by conventional treatment: "Immunotherapy works best in such a situation."

At the Department of Pediatrics of the University Hospital of Würzburg, Matthias Wölfl also studies immunotherapy with T cells. In cooperation with Professor Paul Gerhardt Schlegel and Professor Matthias Eyrich, he investigates how T cells should be activated and primed so that they increase the survival chances of children and adolescents with malignant brain tumors (glioblastomas).

The project partners are still in the middle of their work and patients cannot yet be treated with the method. This therapeutic approach is also intended to provide only a supplement to conventional treatment (surgery, chemotherapy, radiation therapy). The method should by no means be construed as a new "silver bullet" for brain tumors, Wölfl advises.

The brain tumor project is supported by the Bavarian Research Network BayImmuNet and receives substantial funds from a registered society of parents committed to helping children affected by leukemia and other tumors by the name of "Elterninitiative Aktion Regenbogen für leukämie- und tumorkranke Kinder Main-Tauber e.V.".