News from the ant kingdom

Many pathogenic bacteria are becoming increasingly resistant to antibiotics. New agents are needed urgently, and the quest for them is also being extended to the ant world. It is here that Würzburg biologists have now made a new discovery. 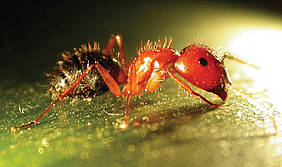 Insects, too, have to fight off bacteria. Ants, for example, live in the ground and often feed on the cadavers of other animals, so they inevitably come into very close contact with potentially harmful microorganisms. One way in which they defend themselves is by using small protein molecules, known as antimicrobial peptides, which can kill bacteria.

“Such peptides are found in all living organisms, including humans, and there are many different types of them,” explains Carolin Ratzka from the Biocenter at the University of Würzburg. The doctoral student, working with her mentor, Professor Roy Gross, and other colleagues, has now proven the presence of some of these peptides while characterizing the antimicrobial potential of the carpenter ant (Camponotus floridanus). The researchers discovered a few surprising things that might also have consequences for commonly accepted hypotheses regarding the immune system of social insects.

The genetic material of the fruit fly Drosophila contains the blueprints for some 20 different antimicrobial peptides, and this number is also high in other insects. “Yet, social insects like bees and ants have only very few peptide genes,” says Carolin Ratzka.

This has led some biologists to conclude that bees and their like do not need so many of these deterrents because they practise a kind of social defence: the insects groom each other, separate the sick from the rest of the brood, and keep their nests clean. This might spare them the cost-intensive production of many different defence peptides.

Numerous peptides from a single gene

But the number of antimicrobial peptides is now higher than originally thought, at least in ants, as the Würzburg scientists reveal in the journal PLoS ONE. In the carpenter ant they found a further peptide gene in addition to the two previously known: this has a recurring structure and therefore contains the blueprints for as many as seven antimicrobial peptides. The researchers then examined other ant species as well and found that in one of them the gene can even produce 23 different peptides.

“The individual peptides differ from one another in their sequence, which might have an impact on their efficacy against bacteria,” says Professor Roy Gross. Further studies are now needed to show whether this assumption is correct and which bacteria are targeted by the newly discovered peptides. The Würzburg biologists have every confidence. After all, they are familiar with very similar peptides in honey bees – and these peptides are all capable of combating pathogenic bacteria.

Carolin Ratzka, Department of Microbiology, Biocenter at the University of Würzburg, T +49 (0)931 31-88029, carolin.ratzka@uni-wuerzburg.de