Fields of rapeseed crop are growing continuously in Germany. As a consequence, more insecticides are being put out on fields to fight animal pests such as the pollen beetle. Scientists from the University of Würzburg have now discovered a simple alternative to chemicals. 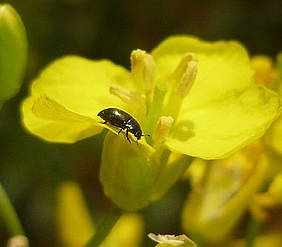 The increased cultivation of biofuels such as rapeseed has drastically changed the German landscape. According to the Food and Agriculture Organization of the United Nations, rapeseed crop areas have grown by around 50 percent in the past 20 years with a twofold increase in rapeseed production in that time. Animal pests such as the pollen beetle Meligethes aeneus have benefited from this development as well: The insect is regularly responsible for significant yield losses and can only be kept at bay by the intensive use of insecticides.

Publication in the Journal of Applied Ecology

New findings now show that the pest pressure can be reduced by relatively simple methods: If farmers coordinate the proportion of rapeseed area in a region over several years, pest abundance decreases significantly. These research results are presented by a team of the Department of Animal Ecology and Tropical Biology (Zoology III) of the University of Würzburg in the latest issue of the Journal of Applied Ecology.

The scientists conducted a study to investigate how rapeseed crop areas and the annual increase or decrease of the cultivated area affects pollen beetle infestation and biological pest control through ichneumon wasps. These findings were made by Gudrun Schneider and Verena Riedinger, two doctoral candidates, supervised by Jochen Krauss, Andrea Holzschuh and Ingolf Steffan-Dewenter. The study was part of the EU project SCALES and the Collaborative Research Centre "Insect Timing".

At first glance, the biologists' findings seem sobering: Despite the regular use of insecticides on the conventionally cultivated fields, the pollen beetle caused massive yield losses. Under these conditions, the natural enemies of the pollen beetle such as the ichneumon wasp were too few to control the pest efficiently. "Non-upturning soil cultivation and more flowers could help establish larger antagonist populations," Gudrun Schneider therefore suggests.

At second glance, however, the study shows a positive aspect: Pests were less abundant in fields where significantly more rapeseed was cultivated than the year before, resulting in higher yields for the farmers. Jochen Krauss draws the following conclusion: "Pest pressure could be reduced significantly through intelligent crop management. This would require regions to rotate crop cultivation areas annually. In fields where a lot of rapeseed was cultivated in the previous year and with an established pest population, only little rapeseed is allowed in the following year so that the natural enemies of the pest can efficiently control them across the reduced number of rapeseed fields."

In other regions where only little rapeseed was grown in the previous year, a lot of rapeseed can be cultivated in the following year, since the pests across all fields are diluted to a degree that they only cause little damage. "This study could bring new stimulus to the agricultural concept of temporal-spatial management of crop areas in a region," says Professor Ingolf Steffan-Dewenter, head of the Department of Animal Ecology and Tropical Biology.

Should these findings be confirmed for other crop cultures, the future could see more farmers coordinate their crop cultivation in one region to reduce the pest pressure on crop plants. Less pesticides would be necessary as a result. The authors of the study also highlight other important factors such as promoting natural antagonists, for example gentle soil cultivation or creating flowering strips. 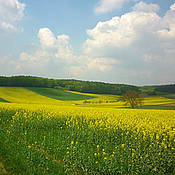