Using software to tune a piano: Two physicists from the University of Würzburg are making this happen. They have made their tool "Entropy Piano Tuner" available for free download on the Internet. 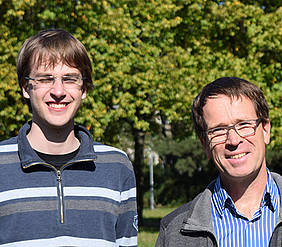 "Piano tuners facing unemployment": That was the media headline a few years ago after some had gotten wind of the new idea from Würzburg. Professor of physics Haye Hinrichsen had claimed in a publication that the physical quantity of entropy, which is a measure of a system's disorder, should be useful for tuning a piano.

There was, however, a catch to it: At the time, it had only been an idea and no real piano had actually been tuned using this "new method".

But now in October 2015, Hinrichsen announces the implementation of his idea: "Christoph Wick, my former master student, and I developed a software and tested it in a double-blind study in cooperation with Professor Andreas C. Lehmann from the Würzburg University of Music."

The test was successful. "So, we published the software under the name 'Entropy Piano Tuner' as an open source project. Available for free download, the software is easy to operate and runs on all standard devices, even on smartphones and tablet computers," Hinrichsen says.

Pianos have a complex range of overtones. So piano tuners need a fine ear and technical skill to harmonise this huge variety of overtones.

Even though simple electronic devices, which allow adjusting musical instruments to the correct tone frequencies, have been around for some time, they are not suitable for pianos, because: "When using these devices to tune pianos, they seem out of tune to the trained ear," Hinrichsen explains. This is because these electronic gadgets tune the fundamental but not the overtones. The latter, however, are crucial as to whether we perceive a sound as harmonic or not.

Reception of the "Entropy Piano Tuner" with experts

Hinrichsen and Wick rectified this problem by using the physical quantity of entropy and a suitable algorithm. "Our Entropy Piano Tuner goes down well especially with piano tuners and it is discussed in specialist forums," Hinrichsen is pleased to tell. While some experts think that working with the new software takes too long, others are impressed by the good result.

According to Hinrichsen, demand for the software is surprisingly high: To date the Android version of the software has been installed more than 5,000 times worldwide. And the physicists have gone even further: "Committed piano technicians are volunteering to translate the tuner software into other languages, even into Chinese."

Opinions from the "Pianoworld" discussion forum 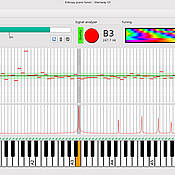