The University of Würzburg continues to expand its networking activities with the world’s elite institutes of higher education: it has now concluded a partnership agreement with the renowned Peking University. 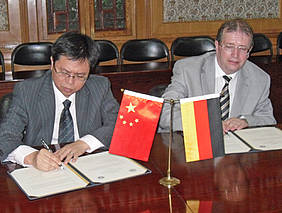 The President of the University of Würzburg, Alfred Forchel, signed the agreement on August 4 in Beijing. The signatory for the Chinese university was its Vice President, Li Yansong.

Peking University, founded in 1898, is not only the oldest modern university in China, but also the one with the greatest reputation. It offers the full range of subjects, boasts more than 38 faculties, and runs nine hospitals in Beijing and other cities across the country.

Peking University has 33,000 students and around 4,800 employees. Particular renown is enjoyed by its humanities, economics, and law faculties. Many prominent intellectuals and politicians have passed through its doors. Even Mao Zedong worked at Peking University in his youth as a library assistant.

Besides being a first choice for research and academic study in China, Peking University is regarded as the birthplace for cultural and political developments that shaped China in the 20th century: it witnessed the emergence of the Democracy Movement of 1989 and the May Fourth Movement of 1919. The latter is seen as the starting point for the political and social modernization of the country.

Relations that go back years

The University of Würzburg has been maintaining close relations with Peking University for many years now. It has even been running its own center there since 2001. This has looked after over 300 Würzburg students to date from a variety of disciplines, who have received some of their education there immersed in Chinese language and culture. This successful venture, established and also maintained by the Department of Chinese Studies at Würzburg, laid the foundations for this newly agreed partnership.

The collaboration between Peking and Würzburg universities is set to be expanded and intensified. In a meeting, the presidents of both universities agreed that the first step should be to organize joint summer academies. These are to take place in Beijing and Würzburg and be devoted alternately to the humanities and natural sciences. A further aim is to increase the exchange of students and scholars.

The new agreement means that the University of Würzburg now has partnerships with three universities in China: it has had a relationship of this nature with Zhejiang University in Hangzhou since 1986, and with the East China University of Science and Technology since 2008. 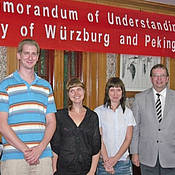