Spider silk fibers are very light, extremely tough and highly stretchable. This makes them interesting for industrial applications. Researchers at the Biocenter of the University of Würzburg have now discovered new details about the proteins of which spider silk consists. 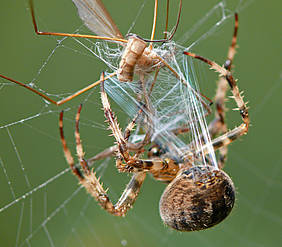 Spider webs are made from a fascinating material. The eight-legged critters produce it in the silk glands on their abdomen from special proteins, which are spun into long threads. This can be done extremely fast: For a quick descent, for instance, they extrude the silk threads with a speed of up to one meter per second.

However, the silk-spinning speed of the spiders is not the only impressive thing – the intrinsic properties of the material are no less astonishing: "Taking into account its lightness in a weight-for-weight comparison, a spider's dragline or the framework thread of a web is tougher than steel or even than the high-tech fiber Kevlar," explains Hannes Neuweiler at the Biocenter of the University of Würzburg.

It's no wonder that scientists and engineers try to emulate the production of spider silk technologically in research laboratories and industrial facilities. There are many conceivable applications, ranging from novel fibers for high-performing textiles to innovative materials for vehicle construction or medical technology. Spider silk has the additional advantage of being biologically compatible with the human body and it is completely biodegradable.

"From a technological perspective, the production of spider silk works quite well already. So far, however, the outstanding mechanical properties of natural spider silk have not been attained in this way," says biotechnologist Neuweiler. And he knows a reason for this: We still do not understand the molecular mechanisms in the natural spinning process well enough to imitate them perfectly.

The dynamics of the spinning process shown

What the Würzburg researcher finds particularly fascinating about the spinning process is the speed with which individual protein molecules in the spider arrange themselves into long threads. He examined this aspect in greater detail – after all, his research team specializes in the visualization of protein dynamics. This research requires the application of special optical methods.

Neuweiler and his associates have now analyzed a certain section of a silk protein from the nursery web spider Euprosthenops australis. "This section is very interesting, because it connects the terminal areas of the proteins that link to form silk threads," says Neuweiler.

The result is published in the journal "Nature Communications": The observed section links the proteins 1000 times faster than is usual in common protein-protein interactions. In addition, there is another striking feature: The presence of salts does not slow down the process, which is generally the case in such fast protein interactions. The researchers explain this phenomenon with an electrical particularity of the examined protein section, namely its peculiar dipole-dipole interactions.

"With the silk production of spiders, evolution seems to have found a way of greatly accelerating the association of proteins even in the presence of physiological concentrations of salt," explains Neuweiler. This is necessary because the silk gland contains several varieties of salts at the end of the spinning duct, where the silk protein fibers are generated, which salts play some role in the spinning process. Their precise function, however, is still poorly understood.

Further exploration of the phenomenon

The Würzburg biotechnologists are now scrutinizing this "salt resistance" further. Next, the researchers are going to determine whether this phenomenon also occurs with other spider silk proteins in other types of silk glands, as spiders have up to seven such silk glands in their abdomen, with which they can produce different kinds of silk.

Dr. Hannes Neuweiler, Department for Biotechnology and Biophysics, Biocenter at the University of Würzburg, T +49 (0)931 31-83872, hannes.neuweiler@uni-wuerzburg.de 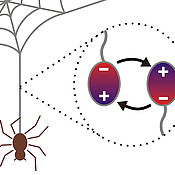