In the genetic material of a young woman, an international team of scientists has discovered a genetic defect unknown so far. Due to this defect, the human body is not able any longer to repair certain DNA damages. 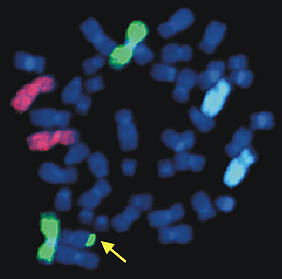 The DNA is being damaged continuously: It is affected by solar UV radiation just as by toxic substances from the environment. However, defects also occur during cell division: For this, the DNA has to be doubled and during this complex process defects occur occasionally.

On principle, the organism is able to repair such damages on its own, even serious damages like complete DNA double-strand breaks at the same site. In this case, first the so-called MRN protein complex is called into action: By means of this complex, the damage is detected and signaled to the repair system of the cell.

In the case of the young woman, this important protein complex does not work properly. The scientists are familiar with the complex: It consists of three proteins. For two of them, mutations are known for years. The newly discovered defect concerns the third protein which is referred to as RAD50 and which holds the ends of the DNA break together like a molecular clamp.

"We know the patient and her parents for almost 15 years now" says Prof. Detlev Schindler of the "Institut für Humangenetik" (Institute for Human Genetics) of the University of Würzburg. At the beginning, the scientists assumed that the girl was suffering from the so-called Nijmegen breakage syndrome (NBS). This congenital disease results from one of the defects of the protein complex known at that time. It is very rare and, statistically speaking, it only affects one in three million people.

Patient not affected by serious complications

The young woman shows symptoms that are typical for this disease: microcephaly, growth retardation as well as physical and mental retardation. In the course of time, it turned out that something was different with that woman, because she was not affected by the serious complications of the disease. She never experienced serious respiratory infections which very often are fatal for NBS patients. Her immune defence is normal. To date, she shows no signs of lymph gland cancer.

Now, the reason for those deviations has been found: The patient does not suffer from NBS, but from a disease which has been unknown so far. The scientists called it "NBS-like disorder". The mutation on which the disease is based has been characterized by the researchers from Würzburg in cooperation with colleagues from Hanover, Magdeburg, Berlin, Israel and Australia.

The woman's organism does not form enough RAD50 proteins. Moreover, the residual proteins do not execute their function sufficiently. "There are a residual quantity and a residual function, and possibly this is the only reason why the patient is still alive", says Detlev Schindler. Because if no RAD50 is available at all for an organism, it dies already as an embryo. This is known from mice showing the defect mentioned above. Perhaps the patient's mutation is so rare that she is one of only few living people suffering from this disease.

Benefits of the findings

What are the benefits of these findings? The patient herself cannot benefit from the findings. However, perhaps they might be helpful for the parents of children for whom there is a suspicion of having the Nijmegen breakage syndrome. Because now, by means of genetic diagnostics it is possible to verify whether they are really suffering from this serious syndrome or from the newly discovered disease.

The research results also offer benefits for science. "We have clarified another step going on during the repair of DNA double-strand breaks and we begin to understand which role it plays", says the professor from Würzburg. Currently, he and his team examine how the RAD50 protein works together with other proteins. This work shall provide further findings concerning the signaling pathways within the cell allowing the organism to eliminate damages of the genetic material.