Stroke and heart attack are the leading cause of death in the Western world. Würzburg scientists have used a special technique to get a clearer picture of the cells involved and their activity. 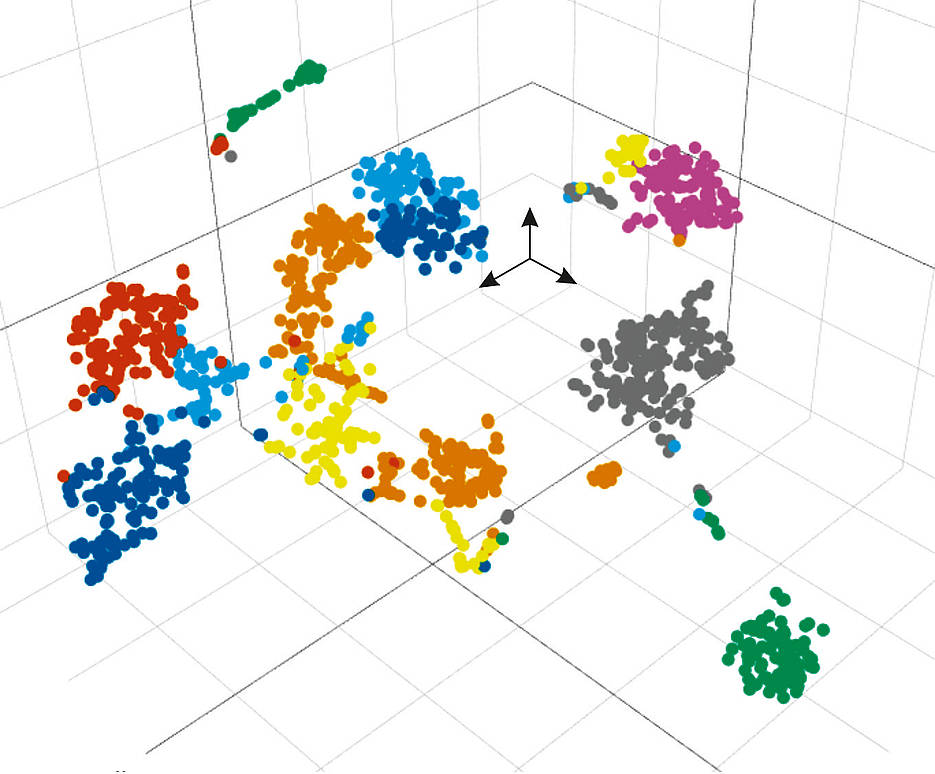 Illustration of the gene expression fingerprint of each single cell in a three-dimensional projection after bioinformatics analysis to identify the cellular phenotype. (Graphic: Cochain/Vafadarnejad/Saliba/Zernecke)

Atherosclerosis is the most common cause of death and disease in the Western world. In Germany, about 300,000 people each year suffer a heart attack and some 270,000 a stroke as a result of the condition. Atherosclerosis is estimated to be responsible for a little more than half of all deaths in these countries.

Searching for the disease triggers, scientists from the University of Würzburg and the Würzburg University Hospital have now made a step forward: For the first time, they closely examined the immune cell populations in the affected vessels which play a significant role in the pathogenesis. They present their results in the journal Circulation Research.

The study was conducted by Professor Alma Zernecke-Madsen and her team at the Department of Experimental Biomedicine II at the Würzburg University Hospital in close cooperation with Dr Emmanuel Saliba and his team at the Helmholtz Institute for RNA-based Infection Research (HIRI) established at University of Würzburg in 2017, a branch of the Helmholtz Centre for Infection Research (HZI).

The risk factors for atherosclerosis are well known and include a high fat diet, lack of physical activity and smoking. But there are still a lot of unresolved questions about what happens exactly inside the affected blood vessels. The disease often begins with tiny damages of the interior vessel wall that lead to chronic inflammation.

Subsequently, fats and other constituents of the blood are deposited in the vessel wall, and immune cells from the blood migrate to the damaged area where they produce signalling substances to summon more immune cells. This leads to the formation of so-called atherosclerotic plaques which increasingly clog the blood vessels, and upon plaque rupture can completely block circulation of blood to different organs.

An exact image of the cells involved

"It has already been suspected that different macrophage subsets are at work in atherosclerotic vessels where they assume different tasks," Clement Cochain and Alma Zernecke-Madsen explain. In the past, however, scientists always failed to identify them because the suitable markers were not available. The use of single-cell RNA sequencing has now allowed the Würzburg team to be more successful.

This technique isolates the RNA molecules from individual single cells and analyses them using  next-generation sequencing. "The data delivered by this method provide information on the gene expression fingerprint of each individual cell and give insight into their specific functions," Dr Emmanuel Saliba explains.

The scientists took cell samples from healthy and atherosclerotic aortas and sequenced them. They identified two types of macrophages,, monocytes and so-called monocyte-derived dendritic cells only in diseased vessels. In healthy vessels, they found local macrophages. In addition, several other immune cells could be detected in both healthy and diseased vessels.

As part of the immune system, monocytes circulate in the blood stream before migrating into the tissue to differentiate further to specific tissue macrophages. They are also part of the cell-mediated immune response and reside in the human body for several months.