Nanotubes laid out in stripes

New technologies can be realized with thin layers of carbon nanotubes. Würzburg researchers have examined a technique that creates such layers, gaining fresh insights. 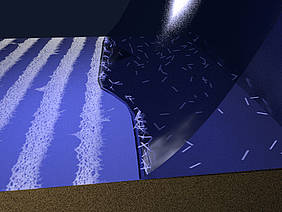 A number of technical innovations of recent times involve the use of thin layers of carbon nanotubes. In 2013, for instance, scientists from Stanford University (USA) presented the prototype of a computer whose electronic components are based not on silicon but on carbon nanotubes. And nanotubes are already being used in part in smartphone displays – as a more cost-effective alternative to conventional indium tin oxides.

Thin layers of carbon nanotubes can be generated using various methods. “It is very important to be able to control the production of the layers precisely in order to achieve the desired structures and properties,” says Professor Tobias Hertel from the University of Würzburg. His team at the Institute of Physical and Theoretical Chemistry has now gained new insights into this. These are presented in the journal “ACS Nano” published by the American Chemical Society (ACS).

The team led by Tobias Hertel has examined the technique of horizontal deposition. In this, the nanotubes from an evaporating liquid are deposited onto a surface. “This technique uses the self-organization phenomena of the nanotubes,” explains the professor, “it enables, for example, the creation of extremely thin layers in which all nanotubes are arranged in the same orientation.”

Using this technique, layers can also be produced in which the nanotubes are organized into regular stripe patterns with dimensions in the micrometer range. “This effect is very similar to the formation of coffee deposits and is therefore also occasionally referred to as the coffee stain phenomenon,” says Hertel. The layers that are created like this are ideal for making nanotube-based transistors. But there was no clear idea before of how the regular stripes are formed and how this process can be controlled. Thanks to the research by the Würzburg scientists, this has now changed.

Researchers previously assumed that the evaporating liquid moves jerkily over the surface to be coated and that every jolt causes a stripe of nanotubes to be left behind at its edge – “in the same way as a stuttering car tire on asphalt brings a car to a shuddering halt,” says Hertel by way of a comparison.

However, his team has now shown that the edge of the liquid moves over the surface at an ever slower pace in a smooth not jerky manner and then picks up speed again. Since this happens periodically, regular stripe patterns are produced.

The researchers have also discovered how to speed up this process considerably: “If we feed the liquid from which the layers are deposited between two glass plates that are only a hair's breadth apart, the stripe patterns form up to a hundred times faster.” Responsibility for this lies with the evaporation at the boundary between liquid and substrate, which can take place at any speed in theory – an effect that can only be felt at the micrometer level.

Professor Hertel has posted a video on YouTube. This shows in slow motion how a stripe pattern consisting of carbon nanotubes is created step by step using the technique of horizontal deposition: https://www.youtube.com/watch?v=KBHswRKdQXQ

The next experiments, according to Professor Hertel, will focus on controlling the layer formation better and accelerating it further. “If we want to make this process truly useful, we still have a whole lot of work ahead of us. In particular, we need to push back the limits of what is possible in terms of the speed at which these layers are created.”