Nanoantennas of the Highest Precision

In the future, tiny antennas made of metal with the ability to capture the sunlight might lead to a more efficient photovoltaic power generation. Physicists of the University of Würzburg have now produced such antennas from gold – with a previously unheard of precision. 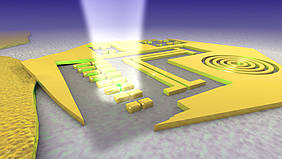 Nanoantennas can – similarly to a burning lens, but much more efficient – collect light and concentrate it into tiny spaces. This allows a more efficient utilization of light energy. There are many applications for these optical antennas, ranging from photovoltaics to integrated circuits that work with light instead of electrons.

However, the production of optical nanoantennas is quite tricky. "They need to be about 300 nanometers in length and include a gap, which is smaller than ten nanometers – wherein the light is collected," explains Professor Bert Hecht of the Physics Department at the University of Würzburg. These are inconceivably small dimensions: One nanometer corresponds to one billionth of a meter. Unless fabricated at this scale, the antennas are not able to concentrate the light properly.

Why of all things is gold used as building material for the antennas? "This is because gold is chemically stable in air," says Bert Hecht. You could also use silver, since it allows the production of optical antennas with even better characteristics. But silver is not stable in air: it corrodes.

"Previously, it was very difficult to manufacture nanoantennas from gold flawlessly with the required precision," says Hecht. But now his Würzburg team, working in collaboration with researchers from Dübendorf (Switzerland) and Milan (Italy), has found a method which makes this feat possible. Initial examinations of the antennas show the great potential of the new method. The results are published in the online journal "Nature Communications".

Previously, optical nanoantennas were produced as follows: Several metal layers were applied to a carrier substrate by means of vapor deposition. Just like in sculpture, the desired patterns could then be worked into this "blank".

The disadvantages of this method: The base layers consist of many small individual crystals, resulting in a grainy structure of these layers. If you try to cut out smooth structures with nanometer-scale features from such a "rough" layer, using a finely focused ion beam, irregular shapes are produced and the desired function is compromised.

Gold flakes from one single crystal

Therefore, the team of physicists lead by Bert Hecht has taken a different approach. Via the method of chemical self-organization, they obtained gold flakes which consisted of one single gold crystal and hence were free from any internal granular structure. By means of ion beam milling, the researchers were able to fabricate nanostructures from these flakes, which are impressive in their precision: The cut edges are flat like one single layer of gold atoms.

Optical antennas produced in this way concentrate the light in their gaps ten times better than conventional antennas. This new method now enables the researchers to create complex large-area structures reliably without any imperfections. "This is a big step towards the realization of future applications, such as the production of artificial light-harvesting complexes for photovoltaic systems or the development of integrated optical circuits," explains Hecht with enthusiasm.

Are innovative, highly efficient photovoltaics applications soon to come? No, at least not at this stage; the Würzburg Professor dampens overly high expectations: "We are still at the very beginning. First, we must fundamentally explore the potential of optical nanoantennas." For this purpose, it is best to use gold as building material. However, even in the future, solar cells containing gold will certainly not be seen on our rooftops.

In the coming years, the Würzburg physicists are going to explore the potential of nanoantennas in a project funded by the Volkswagen Foundation (Hanover) under the program "Integration of Molecular Components in Functional Macroscopic Systems". Additional funds are provided by the German Research Foundation (DFG) under the priority program 1391 "Ultrafast Nano-Optics".