Whether blood, colon or breast cancer: In approximately 80 percent of all tumour diseases, the p53 gene has mutated in human cancer cells. Scientists of the University of Würzburg Biocenter depict the consequences of this in the Cancer Research journal. 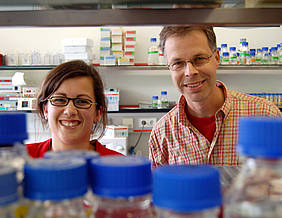 New blood cells develop, cells of the intestinal mucosa renew themselves, dead skin cells are replaced – cells continually divide in the human body. If any errors occur in this process, danger is imminent: Diseases can develop, for instance cancer, and that is why the organism controls this complicated process very carefully.

The p53 contains the blueprint for a protein that is essential for a controlled cell division. In general, it is proteins that spur and control a cell division. Their production in the cell, therefore, follows a precise time schedule. So the genes that provide the parameters for building the proteins must be activated and deactivated again at very specific points in time. "Above all, it must be ensured that these genes are deactivated after the cell division; otherwise, the cell will continue to grow in an uncontrolled manner", says Professor Stefan Gaubatz.

DNA damages bring the p53 protein on the scene

In every cell division, there are certain control points at which the cell checks the proper sequence of the division, detects any damage done and repairs it.

If the DNA has been damaged, the p53 protein comes on the scene: It ensures that from a major protein complex called LINC, a part that carries the designation B-MYB detaches. The remaining part of the complex then silences genes that promote the cell growth. The cell in turn slows down its growth and thus gains enough time to repair the damages. It is this mechanism that has been elucidated by the study group of Stefan Gaubatz.

In many cancer cells, the p53 has mutated and thus lost its function. "The tumour cells can no longer completely stop the cell cycle then", the Würzburg researcher explains. This makes them sloppy and hasty: Defects in the DNA are not repaired, but the cell division proceeds. Damages accumulate and may make the tumour more and more difficult to treat. It is also conceivable that this mechanism triggers carcinogenesis in the first place.

What exactly happens in cancer cells with mutated p53? The Gaubatz team has found out with the help of cell cultures: Even if the DNA gets damaged in the cell division process, the composition of the major LINC protein complex remains unchanged – the B-MYB protein part no longer detaches. Then the researchers, by way of experiment, made sure that this step did take place nevertheless. The result: The cancer cells were able to stop the cell division process again.

Next steps in research

The next steps now consist in verifying this effect in animal models. In addition, the scientists want to investigate more closely how B-MYB and the protein complex are regulated. From their research work, they ultimately expect new approaches for improved cancer treatment.

The Munich-based Wilhelm-Sander foundation supports the project, and so does the Deutsche Forschungsgemeinschaft within the scope of the Transregio SFB TR17 (Ras-dependent pathways in human cancer).