In multiple sclerosis, the immune system also damages the nerve cells with its misguided activities. This is what regularly happens in the targeted immunological attack on the myelin sheaths of the nerve cells, as shown experimentally for the first time by researchers from Würzburg and Zürich. 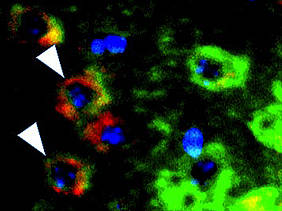 Inflammations in the central nervous system can be triggered by viruses or by the immune system. The latter is the case in multiple sclerosis. With drastic consequences: The cells responsible for building and maintaining an insulating sheath around the nerve fibers die off. The sheaths degenerate as well and often even the nerve cells are destroyed eventually.

“In the example of multiple sclerosis, not only the loss of the myelin sheaths but particularly the death of the nerve cells is thought to be decisive for the permanent disabilities that many patients have to deal with,” says Professor Heinz Wiendl at the Department of Neurology of the University of Würzburg. Such disabilities include paralysis or impaired vision.

Now, for the first time, two study groups have simultaneously shown that certain T cells of the immune system not only directly affect the myelin-generating cells but also cause “collateral damage” to the nerve cells or their extensions. The research has been published in the journals Glia and American Journal of Pathology.

Wiendl’s team at the Department of Neurology of the University of Würzburg was able to demonstrate this with brain tissue cultures: T cells exclusively targeting a specific structure on the surface of the myelin-generating cells also caused a significant loss of nerve cells within just a few hours. How this indirect effect might be accounted for is explained by Würzburg researcher Sven Meuth: “Possibly, the T cells release some soluble factors, such as perforin or granzyme B, which in turn migrate to and damage the nerve cells.”

The aggressive T cells act just like serial killers: “Every single one of them can kill off up to 30 myelin-generating cells and – at the same time – destroy up to ten nerve cells,” says Heinz Wiendl.

These T cells virtually cut through the extensions of the nerve cells. This has been established by the team headed by Professor Norbert Goebels of the University of Zürich (now Düsseldorf) in a similar experimental approach by means of video analysis.

“These results help us to better understand the development of acute and chronic damage in inflammations of the central nervous system,” explains Professor Wiendl. In future, the patients might also benefit from the findings – after all, the aggressive T cells are an attractive target for new therapies. Therefore, the Würzburg scientists are eager to find out as much as possible about these serial killers.

Multiple sclerosis: about the disease

Globally, approximately 2.5 million people are affected by multiple sclerosis; in Germany, there are about 122,000 patients according to current estimates. Here, approximately 2,500 new cases of the disease are diagnosed per year. Women aquire the disease almost twice as often as men.

In MS patients, the immune system mistakenly attacks the components of the nervous system, most prominently the nerve sheaths eventually destructing neural cells. Most often, the onset of the disease starts in early adulthood with relapsing remitting neurological symptoms. Initially people affected perceive tingling sensations in arms and legs, have walking disturbances or encounter visual problems. In the course of disease patients often acquire permanent disability. Some of them need a wheel-chair at later stages.

At the moment, there is no cure for multiple sclerosis; however, medical treatment can alleviate the symptoms of the patients and improve their quality of life. The Department of Neurology in Würzburg accommodates more than 2000 MS patients.

Prof. Dr. Norbert Goebels, Department of Neurology of the University of Düsseldorf, norbert.goebels@uni-duesseldorf.de