People with multiple sclerosis often have problems with their gait. A drug that can help them is unfortunately only effective in fewer than half of patients. Now medics from the Department of Neurology at the University of Würzburg have developed a method for predicting the success of this treatment. 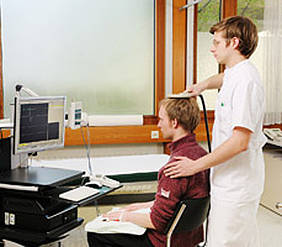 People who suffer from multiple sclerosis (MS) have centers of inflammation in the brain and spinal cord, which cause symptoms that range in severity depending on their site and size. Many patients have gait problems that seriously impede them in everyday life. The medicine of choice in this case is the agent fampridine, which has been approved in Germany since 2011. It blocks potassium channels on the surface of nerve axons and, in so doing, can improve the conductivity of nerve fibers. After taking fampridine, many sufferers are able to walk more quickly again; they also report that they feel steadier walking.

However, studies even before the approval of fampridine have shown that fewer than half of patients with MS actually benefit from taking the drug. The rest experience no change in their ability to walk. For this reason, physicians can currently only give the medication to their patients for two weeks initially as a trial. Only if the ability to walk has improved markedly after this time are they permitted to prescribe the drug on a permanent basis.

A method for predicting treatment success has now been developed by scientists from the University of Würzburg. The team, led by medics Dr. Daniel Zeller and Dr. Mathias Buttmann, turned to a painless examination technique known as transcranial magnetic stimulation, which works without the use of harmful rays and has been used in clinical routine measurements for many years. The researchers have now published the results of their work in the Journal of Neurology, Neurosurgery and Psychiatry.

“We have taken a closer look at the correlation between the conduction velocity of motor pathways in the central nervous system and the response of gait disturbance to fampridine in patients with MS,” is how Daniel Zeller describes the study. Their findings are unequivocal: “With the help of magnetic stimulation it is possible to say in advance whether fampridine will improve a particular patient’s ability to walk,” says the medic.

Twenty MS patients were examined by the scientists in this study. Prior to treatment with fampridine, they used transcranial magnetic stimulation to determine the so-called central motor conduction time (CMCT). This is the time that an electrical impulse takes to travel from the cerebral cortex to the nerve root level with the spine. “The central motor conduction time primarily reflects the degree of damage to motor pathways as a result of inflammatory demyelinating lesions,” explains Zeller.

The scientists also measured the walking speed of their study participants prior to beginning treatment as well as on day 14 of taking fampridine. Only if the speed increased by at least 20 percent over two different distances did they interpret this as a successful response to treatment.

The study revealed a significant correlation between the CMCT and the changes in walking speed while taking fampridine: the longer the CMCT was prior to treatment, the better the patients responded to the medication. In addition, the average CMCT prior to treatment in the group of treatment responders was significantly higher than in patients who did not respond to fampridine (the non-responders). The same result was also found when the scientists relaxed the response criterion to include a ten-percent improvement over both walking distances.

In summary, the study demonstrated that taking fampridine brought no improvements in walking speed for any patient with a normal CMCT. All the participants for whom the drug was effective had a longer CMCT prior to starting treatment. And only in some patients with a longer CMCT did fampridine treatment remain unsuccessful.

“This finding is consistent with what we presume is fampridine’s mode of action,” says Daniel Zeller. The agent ultimately improves impulse conduction in central pathways and their conduction velocity.

In particular, however, the study indicated that MS patients with a normal central conduction time are extremely unlikely to benefit from fampridine, whereas a longer CMCT prior to treatment increases the possibility of a response. If these results are confirmed by a larger study, magnetic stimulation could help neurologists in clinical practice to estimate the likely success of treatment with fampridine in advance, thereby avoiding unnecessary fampridine treatment trials.

In Transcranial Magnetic Stimulation, physicians place a ring-shaped magnetic coil near the skull. This coil produces a rapidly changing magnetic field that sends magnetic impulses through the skullcap into the brain. There it triggers an action potential in the neurons and the nerve cell transmits an impulse, which in turn can be measured from outside. Even though the technology is only a few decades old, it is now routinely used in research and diagnostics.