Multiple Sclerosis: Benefactors in the Brain

The inflammatory process in the brain of multiple sclerosis patients is triggered by their own immune system. However, there is one type of immune cells that seems to fight against the destructive progress – and might be used for therapeutic purposes in future. 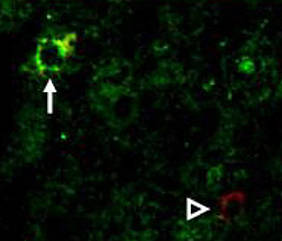 These “beneficial” immune cells display a propensity to migrate from the blood into inflamed nervous tissue. “Drawn in by specific chemoattractants, they obviously counteract the detrimental effects of other immune cells in the brain,” explains Heinz Wiendl, Professor at the Department of Neurology of the University of Würzburg.

Wiendl’s research group presents this new research results in the journal Annals of Neurology. The findings are based on a variety of experiments using biomaterial from multiple sclerosis (MS) patients including blood, cerebrospinal fluid and tissue of the central nervous system (CNS).

A concept for a new form of therapy?

Thus, this work represents a demonstration of the existence of protective elements in the immune activities within the brain of MS patients. Conceptually this beneficial inflammatory factor should counterbalance inflammation in the CNS, but their impact obviously is not strong enough to dampen the disease. However, the notion of such activities might be enhanced in a therapeutic approach eventually benefiting the patients.

How can this be achieved? “An answer to this question as well as a possible practical approach is the long-term objective of our work,” says Wiendl. But the next step for the Würzburg researchers is to characterize this regulatory T-cell population more precisely and to find ways of using them for therapeutic purposes.

Interesting molecules on the surface

The beneficial immune cells have been identified as so-called naturally regulatory T-cells. Wiendl's team discovered and described them in a publication in the journal Blood in 2007.

The characteristic of these cells: On their surface, they express a protein called HLA-G, which is attributed to have a strong immunosuppressive function. The signal for the migration of the cells into inflamed tissue is obviously influenced by another surface molecule, the so-called chemokine receptor CCR5. This is an additional new finding of the Würzburg scientists.

Multiple sclerosis: about the disease

Globally, approximately 2.5 million people are affected by multiple sclerosis; in Germany, there are about 122,000 patients according to current estimates. Here, approximately 2,500 new cases of the disease are diagnosed per year. Women aquire the disease almost twice as often as men.

In MS patients, the immune system mistakenly attacks the components of the nervous system, most prominently the nerve sheaths eventually destructing neural cells. Most often, the onset of the disease starts in early adulthood with relapsing remitting neurological symptoms. Initially people affected perceive tingling sensations in arms and legs, have walking disturbances or encounter visual problems. In the course of disease patients often acquire permanent disability. Some of them need a wheel-chair at later stages.

At the moment, there is no cure for multiple sclerosis; however, medical treatment can alleviate the symptoms of the patients and improve their quality of life. The Department of Neurology in Würzburg accommodates more than 2000 MS patients.

Professor Heinz Wiendl is in charge of the clinical research group for multiple sclerosis and neuroimmunology at the Department of Neurology of the University of Würzburg. The work of the research group is funded by the German Research Foundation (DFG). Furthermore, Wiendl is currently the speaker of the Multiple Sclerosis Competence Network, which is funded by the German Federal Ministry of Education and Research.