Multiple sclerosis – A riddle of the blood-brain barrier solved

The creation and progression of multiple sclerosis present scientists with many riddles. Now researchers from the universities of Würzburg and Amsterdam have succeeded in resolving an apparent contradiction in the findings to date. Their work will contribute to a better understanding of the impact of treatments at the so-called blood-brain barrier. 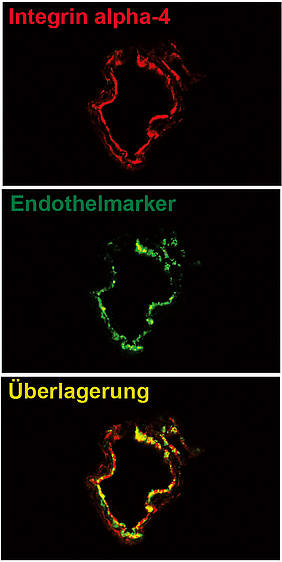 Over two million people worldwide suffer from multiple sclerosis (MS), an initially usually relapsing chronic inflammatory autoimmune disease of the brain and spinal cord. A key element of the progression of the disease is the disruption of the so-called blood-brain barrier. The main component of this barrier are highly specialized cells that line the vascular walls from inside like wallpaper – these are known as endothelial cells. Using surface molecules and transmitters, they control the exodus of immune cells from the bloodstream to the brain tissue with great precision. During an acute flare-up with multiple sclerosis, the endothelial cells increasingly produce different signal molecules, which results in a mass exodus of immune cells to the brain tissue and leads to the characteristic damage.

Two molecules play important roles in the communication between endothelial and immune cells: The vascular cell adhesion molecule 1, or VCAM-1 for short, sits on the surface of the endothelial cells and serves as a docking point for the receptor of the immune cells, integrin alpha 4 beta 1. Both therefore make good targets for potential drugs. And, in fact, using medicines to block the integrin on the immune cells prevents these from continuing to migrate from the blood to the brain tissue. This is the main action mechanism of the highly effective MS drug Natalizumab.

However, the scientists have been puzzled by a series of contradictory findings that are known in connection with a special variant of VCAM-1. “This molecule can become detached from the cell’s surface under inflammatory conditions and can then be identified in a soluble form in blood,” explains private lecturer Dr. Mathias Buttmann. And in this form it has caused confusion to date.

“On the one hand, some studies show that a high concentration of these dissolved molecules in the blood correlates with a high level of inflammatory activity at the blood-brain barrier,” says Buttmann. This suggests that the molecule itself might even disrupt the barrier function. On the other hand, studies on MS patients treated with an interferon beta medicine found precisely the opposite: The higher the concentrations were here, the more reduced the disease activity exhibited by the patients. “Until now, these findings have represented an irresolvable contradiction, and the possible function of the dissolved molecules at the blood-brain barrier has remained unclear,” says Buttmann.

Mathias Buttmann is a senior physician at the University of Würzburg’s Department of Neurology and head of the Neuroimmunological Outpatient Clinic there. Together with scientists from the University of Amsterdam he has now found a solution to the seeming contradiction. The scientists present their work in the current issue of the scientific journal Acta Neuropathologica.

The key results of the study

Deeper understanding of the mode of action of MS therapeutics

According to the scientists, these findings indicate that Natalizumab has a two-fold protective effect at the blood-brain barrier: Alongside the known immune cell blockade, it also likely acts in a directly protective manner on brain endothelial cells in that it prevents destabilization of the barrier function, which is probably what happens in untreated MS patients.

And what explanation can there be for the fact that in MS patients treated with interferon beta high levels of dissolved VCAM-1 go hand-in-hand with reduced disease activity? Mathias Buttmann has one ready: “It probably makes a difference whereabouts in the body the dissolved molecules are released.” If, as is the case in MS episodes, this happens in inflammatory areas of the brain, the disruption to the blood-brain barrier is intensified. “Under treatment with interferon beta, however, the molecules are probably mainly released close to the injection sites frequently altered by inflammatory activity,” says Buttmann. There they might block integrin receptors on immune cells and in so doing ultimately have a protective effect, only reaching the blood-brain barrier in a small concentration and therefore having no harmful effect there.