Multicopter mission to the Arctic

Travelling with the research vessel “Polarstern” into the ice of the Arctic – this is something that many scientists dream of doing. Two doctoral students from the University of Würzburg have been on board. On an ice floe it became clear that they are on the right track with their research work. 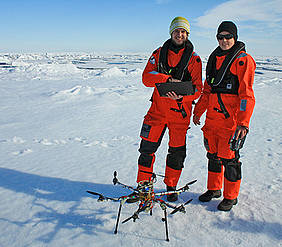 What impressed them in particular in the Arctic Ocean? “The helicopter flights over the ice. When we were set down on an ice floe and the helicopter flew off. The absolute silence that reined there,” says doctoral student Michael Strohmeier. Was that not an oppressive silence in this inhospitable environment? The air and water temperatures were around freezing, and at any time a hungry polar bear could have climbed out of the sea onto the floe. Didn’t you at least get an uneasy feeling there?

No, say Michael Strohmeier and his Würzburg research colleague, Tobias Mikschl. After all, they had their personal “ice guard” with them on the floe – an armed man with the job of protecting the two IT doctoral students in the event of an attack by a polar bear. This security measure is standard on expeditions on the ice. “And we were so focussed on our work that we didn’t think that much about other stuff,” says Mikschl.

Preparing autonomous aircraft for the Arctic

What drives two IT specialists onto an ice floe in the Arctic? Mikschl and Strohmeier are working on multicopters with Professor Sergio Montenegro. These are autonomous aircraft powered by several propellers. “You could also say drones but these days that has a very negative connotation,” says Strohmeier.

The doctoral students therefore had two such aircraft with them on the ice floe. Their goal was to program the multicopters to enable them to navigate independently near the North Pole as well. That is technically difficult due to the very specific nature of the Earth’s magnetic field at the Pole.

In multicopter navigation matters, Professor Montenegro works in collaboration with the Alfred Wegener Institute, Helmholtz Centre for Polar and Marine Research (AWI). There is a good reason for this: Multicopters that navigate independently would make it easier for the institute to work on the edge of the polar ice with its research vessel “Polarstern”. This is where the AWI scientists are researching various physical, chemical, and biological processes.

“To enable us to perfectly plan the dives made by our diving robots, for example, it is important that we have precise information about the movement of the sea ice,” explains AWI engineer Sascha Lehmenhecker. Until now this has meant bringing “ice trackers” onto ice floes using inflatable boats or helicopters, which is a costly, time-consuming, and hazardous operation. Mist, drifting sharp-edged ice floes and polar bears pose risks, and anyone who falls into the freezing cold water has barely half an hour to survive, even in protective clothing.

Autonomous aircraft would be a major step forward here: They could fly autonomously from the boat onto ice floes, record their movement in the sea for a while and then return to the boat on their own again. But, unfortunately, autonomous navigation in high latitudes is a major challenge, according to Lehmenhecker, because the magnetic sensors required for this do not function reliably in the vicinity of the Pole. The reason for this is that the field lines of the Earth’s magnetic field run almost perpendicular to the Earth at the Pole, whereas elsewhere they run parallel to the surface of the Earth.

Taking deviations in the Earth’s magnetic field into consideration

One possible way of solving this problem is to take the deviations in the polar magnetic field into account in the navigation. The Würzburg doctoral students have succeeded in doing this and have proven this in July and August 2015 on an ice floe in the Fram Strait, between Greenland and Spitzbergen: Away from magnetic interference caused by the helicopter or the electric motors on board the “Polarstern” they flew their multicopters manually some three kilometres as far as the eye could see. Then they initiated the autonomous return flight program, and the aircraft returned to the pre-programmed coordinates and landed independently.

As a second possible approach, the scientists are keen to use multicopters fitted with two GPS receivers and thus avoid magnetic sensors. This navigation strategy also works at the North Pole, though so far only with large objects like boats on which the two GPS receivers are far enough apart. However, before it can be used on the relatively small multicopters with a meter diameter there is a bit more development work to do.

The Würzburg doctoral students will now continue to work on both strategies – initially in their rooms at the North Campus. Depending on the progress they make, they may be able to test the improved multicopters under Arctic conditions as early as summer 2016, and certainly by 2017: they will head back north with the “Polarstern” and the Alfred Wegener Institute, together with other partners from the Helmholtz Alliance “Robotic Exploration of Extreme Environments – ROBEX”.

Press release by the Alfred Wegener Institute on the multicopter project

Homepage of the department run by Professor Sergio Montenegro, Aerospace Informatics at the University of Würzburg 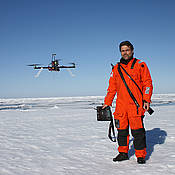 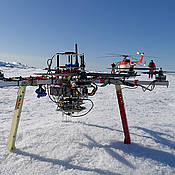 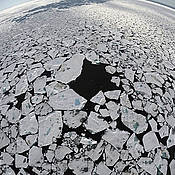