Moss as a pioneer of water conservation

When during evolution did plants learn to conserve water? The first attempts in this regard have been discovered by an international research team with a moss. The findings also revealed how evolution affects molecules. 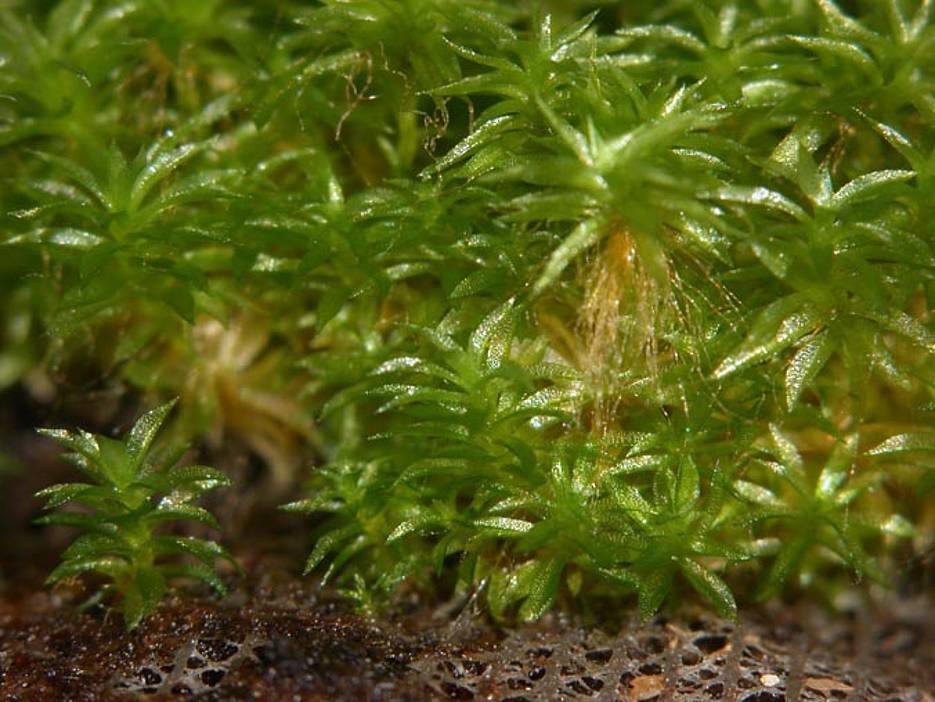 The first plants to venture out of the sea and onto land 500 million years ago were green algae. They had to cope with the fact that they were no longer constantly surrounded by water. This meant that they ran the serious risk of withering slowly in the event of a drought.

A later generation of terrestrial plants, mosses, resolved this problem quite cleverly: If water is in short supply, they do dry out slowly but as soon as they come into contact with water once more their photosynthesis starts up again and they continue to grow. Mosses manage to do this because they acquired a tolerance to dessication during their evolution as a land dweller.

Enzyme OST1 has a key function

Mosses, like all other plants, produce the stress hormone abscisic acid (ABA) when a water shortage occurs. This in turn boosts the production of special proteins that protect it from drying out, known as dehydrins. These ensure that the mosses survive a period of drought without any major loss of function. The production of these dehydrins is particularly reliant on, among other things, the enzyme OST1.

Even with more highly evolved plants, this enzyme ensures that excessive water loss is avoided. However, it does not just do that here via anti-dessication proteins, but using a second path as well: It activates the anion channel SLAC1 of the guard cells in the plant’s epidermis. Thereupon, the guard cells close the pores through which vital carbon dioxide flows into the plant, but through which water is also lost to the environment.

When did guard cells first appear during evolution? The first land-dwelling algae and also the relatively simple liverwort do not yet possess any. It is only with the more highly evolved mosses that guard cells appear, albeit only sparsely still: They are only located on a pinhead-like structure that the moss uses to disseminate its spores.

When during evolution did plants learn to control the production of dehydrins using the enzyme OST1? And when did they begin to use this enzyme to activate the anion channel of the guard cells? These questions have been answered by Würzburg plant biologists Dietmar Geiger and Rainer Hedrich with counterparts from Freiburg, Madrid, Riyadh, Uppsala, Kyoto, and West Lafayette. Their findings have been published in the journal “Current Biology”.

It emerged that all OST1 variants do not differ markedly in their gene sequence and that they can all boost the production of dehydrins. Likewise, all OST1 variants can activate the anion channel of the thale cress. Yet, they failed with the channels of the alga and liverwort. The key to water conservation must therefore lie in the structure of the channel.

With the moss examined, which is younger in developmental history terms than the liverwort, the scientists discovered something unusual: It possesses two forms of anion channel, and one of them reacts already to OST1 – albeit very weakly. If the second, fully inactive channel is modified based on the model of the OST1-sensitive channels, it becomes increasingly active.

As a result, the research team has shown that even very early on during evolution OST1 had matured to such an extent that it is able to control dehydrin production. On the other hand, the channel SLAC1 did not acquire the ability to react to OST1 until moss emerged. “Evolution played with the structure of the channel and with its function until such time as it could be controlled by the existing ABA dehydrin signalling pathway and could assume the task of being a water conservation button,” says Hedrich.

Search for a further evolutionary playground

Does this mean that the question of the evolution of water conservation has been answered? Not yet, believes the Würzburg professor: “The guard cells of the mosses and of the later ferns react only weakly, if at all, to the water stress hormone ABA. We therefore need to examine yet when, on the path to becoming a highly evolved flowering plant, all the functional components of the ABA-dependent signalling pathway gathered in the guard cells. We presume that the playground for the optimization of this path lies in the transition from ferns to early flowering plants.” 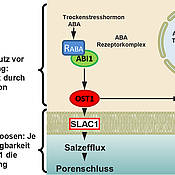