Molecules in the limelight

At the interface between chemistry and physics, Patrick Nürnberger studies chemical reactions with laser pulses on inconceivably short time scales. The establishment of his own junior research group is funded by the German Research Foundation with 1.2 million euros. 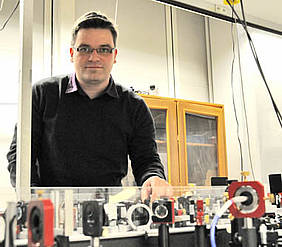 The spaces of time Patrick Nürnberger is concerned with are so short that the expression "space" is anything but appropriate. The physicist studies processes taking place in a matter of femtoseconds. A femtosecond is one billionth of one millionth of a second. To put it in context: Light, the fastest thing in the universe with a speed of 300,000 kilometers per second, travels less than one thousandth of a millimeter within one femtosecond. Incidentally, light takes a major role in Nürnberger's experiments.

"We fire laser light at certain molecules of interest and examine their response," says Nürnberger, describing the principle of his research. This technique, though sounding so simple, actually involves an enormous technological effort, long sessions in the laboratory and extensive pondering over the measured data. Nürnberger works with molecules that exhibit a photochemical reaction when exposed to light. For instance, photoresists react with light – a property used in the production of microchips. Photochemical reactions are also part of everyday life, e.g. when the sticker on the tailgate of a car fades over the years.

Accurate picture of a chemical reaction

Nürnberger and his team are interested in what exactly takes place in the relevant molecules. For this purpose, the researchers hit these substances for a few femtoseconds with a laser pulse, which activates the reaction. A second laser pulse follows with a delay of a few further femto or nanoseconds, providing the physicists with a kind of picture of the processes taking place in the molecule.

"You know, such a molecule usually consists of many components. In the photolysis, one or several of these can be induced to break off and the remainder restructures, giving rise to some reactive intermediate products of short duration," Nürnberger explains. When exactly do such intermediate products appear, how long do they exist, what happens to them subsequently? Such questions are investigated by Nürnberger's research group.

In the second stage, a further step is taken. The scientists no longer content themselves with observing the reaction; they even want to exert their influence on it, relying on several techniques, which can be freely combined for the specific purpose. For example, a laser pulse can be split into light of different wavelengths: An initial blue light might be used to hit and excite the molecule, followed shortly after by a green light triggering a further reaction.

Another variant is this: "With a light pulse in the infrared region, we intend to put into vibration specific parts of the molecule in a selective way," explains Nürnberger. The molecule doesn't get the chance to dissipate this energy before being hit by the next laser pulse, following just a few femtoseconds later. "Such experiments can be useful if you want to know the mechanism by which a certain intermediate product is generated in the first place," says the physicist. The scientists also hope that they might be able at some time in the future to manipulate the process of the chemical reaction in a targeted way so that they can control it with light.

Basic research at the interface between physics and chemistry

The research in this field is still pretty much in its infancy; about 15 years ago, the first experiments in the area of the so-called "quantum control" were conducted. Nürnberger points out that his work is basic research – even though there is naturally always the thought at the back of one's mind that the results of these studies might be of use in finding molecules with certain properties. "We also hope, of course, that we will succeed in steering the chemical reaction into a desired direction by means of the right combination of laser pulses," he adds.

Patrick Nürnberger, who graduated in physics, is now conducting research at the Institute of Physical and Theoretical Chemistry and he is a member of the Faculty of Chemistry and Pharmacy. He likes working at the interface between these two disciplines – to examine chemical processes with methods derived from physics.

Patrick Nürnberger was born in 1978 in the German city of Hof; in 1999, he started his physics studies in Würzburg. Before he received his physics diploma there, he went to the State University of New York at Stony Brook for a master's degree. On his search for a thesis subject he came into contact with a young professor, who was also a newcomer to the State University. The latter proposed that they set up a laser system together. He convinced Nürnberger by declaring that the disadvantage of the work was: "You start from scratch." And the advantage: "You start from scratch." So we bought the components and set up the laser ourselves. This gave me a thorough understanding of laser spectroscopy techniques and I kept working in this field with enthusiasm," Nürnberger reminisces.

After returning from Stony Brook, he obtained his diploma at the University of Würzburg in 2004; in 2007, he did his doctorate with a study in the area of the adaptive quantum control of molecules. From 2008 to 2010, he conducted research at the Laboratoire d'Optique et Biosciences of the Ecole Polytechnique in Paris with a scholarship funded by the German Academy of Sciences Leopoldina. There, he examined the primary reaction steps directly after the photolysis of gas molecules associated to so-called hemeproteins, of which the red blood pigment hemoglobin is an example.

Since last year, Nürnberger has been setting up his own junior research group at the University of Würzburg. In the coming five years, he will receive about 1.2 million euros in funds by the German Research Foundation (DFG) under the Emmy Noether Program. This program is intended to "support young researchers in achieving independence at an early stage of their scientific careers"; by leading their own junior research group, post-doctoral researchers are expected to "gain the qualifications required for a university teaching career," as is set out in the program description of the DFG.

It is not without good reasons that Patrick Nürnberger decided to take his research to the University of Würzburg. "The Institute of Physical and Theoretical Chemistry is superbly equipped with the equipment required for my work," he says. A powerful argument if you consider that the laser used for his studies can easily cost half a million euros. But there was more to his decision than the equipment alone. The working environment is also good in Würzburg:  "As a junior researcher, you feel well integrated here."