Molecular cause of hereditary disease discovered

The Wiskott-Aldrich syndrome is a rare and severe hereditary disease. A hitherto unsuspected protein is believed to be involved in the development of the disease. The "Nature Communications" journal reports on these new findings from Würzburg. 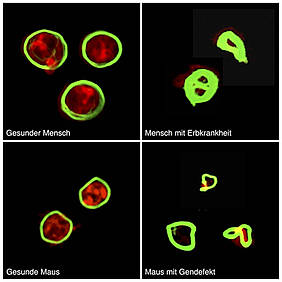 The disease is characterised by thrombocytopenia and immune deficiency with patients suffering from eczema, increased risk of internal bleeding and permanent infections such as otitis media, pneumonia or meningitis to mention the main symptoms of Wiskott-Aldrich syndrome. The incidence of the rare hereditary disease is only one to four cases in a million births, with boys being affected almost exclusively.

The only cure of the syndrome is a bone marrow transplant. Where that is not possible, the symptoms are treated, among others, with immunoglobulins to compensate for the immune deficiency or by giving platelet transfusions. Low platelet counts are typical of the disease resulting in a blood coagulation disorder.

"The disease is believed to be directly caused by a defect of the Wiskott-Aldrich syndrome protein WASp," says professor Bernhard Nieswandt of the University of Würzburg. However, it has been impossible to prove this assumption in laboratory tests on mice to date. But recently the medical scientist and his team have pinpointed another protein as a potential contributor to the hereditary disease as the Würzburg research team reports in the "Nature Communications" journal.

How did the researchers come to this conclusion? Nieswandt and his team are basically interested in platelets and their function in the blood coagulation process. They analysed the role of the protein Profilin1 for the production of platelets from precursor cells in mice and found interesting evidence: "The platelets in mice with a defective Profilin1 gene were reduced in size and number exactly as in Wiskott-Aldrich syndrome," explains doctoral candidate Simon Stritt.

The scientist then discovered even more similarities: The platelets of the mice with the gene defect are smaller than usual, because their cytoskeletal architecture is abnormal while being exceptionally stable. They detected the same mutations in the platelets of four Wiskott-Aldrich patients. "What is more, the Profilin1 in the patients' platelets is found in different places than usual," Stritt further says. This finding also points to the protein being involved in causing Wiskott-Aldrich syndrome.

Significance for treating the syndrome

Direct consequences for treating Wiskott-Aldrich syndrome cannot be derived from this finding. The protein Profilin1 is not a suitable target structure for drugs as it occurs in nearly all cells of the body. "A drug targeting Profilin1 would entail significant side effects," says the doctoral candidate. However, the Würzburg scientists discovered that clodronate, a drug used to treat osteoporosis, could be beneficial in treating the disease: It raised the platelet count in mice with the gene defect to a normal level. This could be a new starting point to treat thrombocytopenia in Wiskott-Aldrich patients.

"Our goal next is to understand the molecular mechanism by which the proteins Profilin1 and WASp interact and how this results in defects in the platelet production and the organisation of the cytoskeleton," the researchers say. Moreover, they want to find out whether Profilin1 also contributes to the development of the immune deficiency in Wiskott-Aldrich patients.