Mimicking the ingenuity of nature

A clean, climate-friendly energy source that is virtually inexhaustible: This is the promise artificial photosynthesis holds. Chemists from the University of Würzburg have now got one step closer to reaching this goal. The scientists present their work in the journal Nature Chemistry. 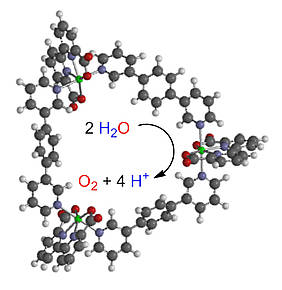 Nature shows how to do it: Photosynthesis is a process used by plants to create energy-rich organic compounds, usually in the form of carbohydrates, and oxygen (O2) from carbon dioxide (CO2) and water (H2O) driven by light. If we succeeded in mimicking this process on a large scale, numerous problems of humanity would probably be solved. Artificial photosynthesis could supply the Earth with fuels of high energy density such as hydrogen, methane or methanol while reducing the amount of carbon dioxide in our atmosphere and slowing down climate change.

Developing the necessary efficient catalysts and associated dyes is a focal area of research at the Chair of Professor Frank Würthner at the University of Würzburg's Institute of Organic Chemistry. Two of Professor Würthner's doctoral students, Marcus Schulze and Valentin Kunz, have recently reported a partial success in this regard. They present the results of their research work in the current issue of the journal Nature Chemistry.

"In nature, the so-called photosystem II is a central component of the photosynthesis process", explains Marcus Schulze. It is a protein complex with a catalytically active centre consisting of multiple metal atoms. They have to work together to split water into its two elementary constituents, a process taking place in two spatially separated electrochemical half reactions. It is already possible to mimic these two reactions in the laboratory. But: "Hydrogen production already works quite well. The water oxidation to oxygen, however, needs to be accelerated so that the balance of the individual half reactions matches better," says Schulze.

Scientists still frequently use the rare noble metal ruthenium as a catalyst for artificial photosynthesis. Basically, the artificial system works with similar efficiency as its natural counterpart. However, the catalyst tends to decompose itself relatively quickly. This is where the chemists of Würzburg leapt to action: "We incorporated the ruthenium atoms into special supramolecular structures which slow down the destruction and enable a kind of 'self-healing process'," Valentin Kunz explains.

This structure is similar to a ring in which three ruthenium atoms are interconnected using three so-called ligands which are specially shaped organic compounds. Custom-tailored binding sites make sure that the metal centres and ligands fit like key and lock. What sounds comparably easy took two years of non-stop meticulous working in the laboratory. "You successively turn different screws and see what happens," Kunz describes their approach.

The result is a "cyclic self-composing system of defined individual blocks" as the two chemists explain. Its benefit in "synthetic terms" is its simple structure and ease of production along with the fact that the blocks automatically assemble to form the desired structure without requiring major technical effort. This property makes it better suited for potential applications than previous systems.

The chemists are pleased to note that the water oxidation catalyst they developed is also more efficient, although they cannot yet explain why that is so. These explanations might be delivered in the near future by the experts in theoretical chemistry with whom Frank Würthner's chair is cooperating closely. Roland Mitrić, head of the Chair of Theoretical Chemistry at the University of Würzburg, and his co-worker Merle Röhr are already looking for an answer to this question by developing formulas and algorithms.

Even though the system of the two junior scientists is better than its predecessors: "We still have a long way to go until the process is ready for the market," explains Marcus Schulze. And: "What we are doing is fundamental research," Valentin Kunz adds. The next steps have already been planned: Firstly, the chemists want to study further changes at the catalyst's structure and their impact on the function. Secondly, they want to link it to dyes so that the reaction becomes photocatalytic, which means the reaction will work with light.

Marcus Schulze and Valentin Kunz's research was performed within the scope of the Bavaria-wide joint project Soltech (Solar Technologies Go Hybrid). Launched in 2012, the Free State of Bavaria funds new concepts to convert solar energy into electricity and non-fossil fuels. So-called key labs in the following universities are involved in the project: University of Bayreuth, University Erlangen-Nuremberg, LMU Munich, TU Munich and the University of Würzburg.

The Würzburg key lab is located at the Center for Nanosystems Chemistry founded in 2010 at Professor Frank Würthner's initiative. His research team has been working on selectively organising small organic molecules to form larger assemblies that absorb sunlight and transport it to electrodes to be converted into electric power. Another goal of the Würzburg key lab is to develop artificial chloroplasts that use light energy to generate fuels similar to a plant cell.

The joint project also includes other participants from Würzburg such as the work groups of Professors Tobias Brixner, Christoph Lambert, Florian Beuerle, Roland Mitrić and Todd Marder from chemistry as well as the teams of Vladimir Dyakonov and Jens Pflaum in physics.