Researchers from the University of Würzburg have revealed a metabolic pathway that seems to make breast tumors more aggressive. The study will also identify possible targets for new cancers drugs. It has appeared in the renowned journal Cancer Cell. 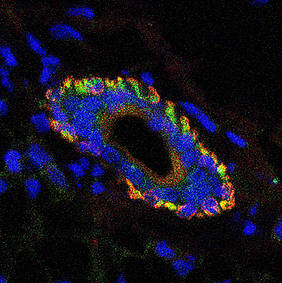 Section through the mammary gland of a mouse. The regions in which the stems cells are located are stained red. In this image, deliberate genetically engineered changes result in the formation of large quantities of MYC, controlling the categorization of stem cells as breast tissue. (Image: Biocenter at the University of Würzburg)

The project involved scientists from Berlin, Cambridge, and San Francisco. For their study, this research team examined a protein known as MYC. MYC is a powerful oncogene. Under certain conditions it causes cells to multiply in an uncontrolled manner. This is the case in some highly aggressive breast tumors, for example. The more that cancer cells form MYC, the more malignant they become and the harder they are to treat.

At the same time, however, MYC assumes a key role in the body. It is involved in regulating adult stem cells. At some point in their lives cells normally decide on a fixed career path, becoming skin cells, liver cells or nerve cells, for example. They cannot abandon this path; for instance, a skin cell will never turn into a liver cell.

Adult stem cells, on the other hand, are pluripotent – their fate has yet to be decided fully. The adult stem cells of the breast, as an example, have yet to categorize themselves as the various types of tissue of the mammary gland. MYC controls this process. “We have been able to show how exactly MYC does this,” explains Dr. Björn von Eyss from the Biocenter at the Julius-Maximilians-Universität Würzburg (JMU).

They found that MYC stimulates stem cell division. To do this it needs a lot of energy. This increased energy consumption activates an enzyme known as AMPK. This enzyme in turn indirectly disables the stem cell program. As a result, the new cells become set on their career: they categorize themselves as breast tissue and lose their stem cell properties.

“Stem cell division and categorization are therefore linked,” stresses Björn von Eyss. “We interpret this as a mechanism to safeguard against cancer: The stem cell cannot simply become random tissue types that keep on dividing in an uncontrolled manner.”

Astonishingly, however, this mechanism seems to have precisely the opposite effect in tumor cells of the breast. There, too, MYC activates the AMPK enzyme. But this makes the tumor even more aggressive and harder to treat. The Würzburg researchers are keen to take a closer look in future at why this happens.

A high level of MYC therefore worsens the prognosis for breast cancer patients considerably. “If we prevent the activity of MYC in mice using genetic engineering, on the other hand, the tumors become more benign again,” says von Eyss. However, MYC is unfortunately not a suitable target for drugs, partly due to its diverse range of effects.

So, the researchers have now set their sights instead on the signaling pathway they have identified. “We are looking specifically for agents that reduce the activity of AMPK, for example,” explains von Eyss. “We may be able to use such agents to make tumors grow less aggressively and respond to drugs better.” 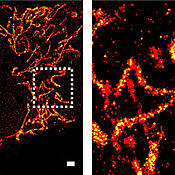