In the fight against malaria potential targets are urgently being sought for new medications. An international team of researchers has now taken a closer look at 85 transmitters and identified a series of possible candidates. Among the party was a team from the University of Würzburg. 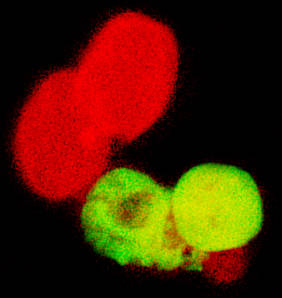 When cells divide, when they migrate, when they produce substances, it is generally signal chains with multiple links that control the process concerned. Protein kinases play an important role here: they transfer phosphate groups and, in so doing, activate the individual intermediate stages of these chains. If they are absent, the signal flow stops. “Kinases are therefore outstanding targets for medication, at least in theory,” says Gabriele Pradel.

Pradel is an outside lecturer heading up a junior research group at the University of Würzburg’s Center for Infection Research. She has already spent many years researching the malaria pathogen, the single-celled parasite Plasmodium falciparum, and has produced crucial findings about its development and lifecycle. For the past three years Pradel and two of her doctoral students were part of an international research team taking a closer look at the kinases of the malaria pathogen.

“Kinases are currently the hot topic in malaria research,” says Pradel. The science world is expecting them to provide possible approaches for new treatments. These are required urgently: every year between one and three million people worldwide die from the consequences of malaria. Admittedly, a range of medications already exist, but these do not meet anywhere near all the requirements placed on them. “Either they are too expensive for large-scale use in developing countries, or they have side-effects that are too severe, or the pathogens have developed a resistance,” says Pradel.

Over the last ten years, 65 kinases and 20 kinase-like proteins have been identified by scientists in the genetic material of Plasmodium falciparum, which have now been examined more closely as part of the EU project “Signalling in Malaria Parasites”. The project was headed up by Professor Christian Doerig from the Global Health Institute in Lausanne. Five of these kinases were researched by Gabriele Pradel and her doctoral students.

The stages in the pathogen’s development

Plasmodium offers targets during several stages of its development, which is surprisingly intricate for a single-celled organism. If a human is bitten by an infected mosquito, malaria pathogens migrate through the bloodstream to the liver in a matter of minutes. There they remain for some time, reproducing asexually. After about a week, they return to the blood and attack the red blood corpuscles, triggering the typical malaria fever spikes in the sufferer.

It is not until the single-celled organisms become stressed that they switch to a new stage in their development. Stress here means: “Density in the blood becomes too high, which generally means that the afflicted patient is close to death. Or the body issues an immune response, which signifies possible death for Plasmodium. Or a medication starts its attack,” says Pradel.

In all these situations, some cells switch to sexual reproduction. If the sufferer is bitten again, the cells enter the mosquito and settle in its intestine, where they mature into gametes of different sizes, which in principle are comparable to egg and sperm cells in humans. These merge together, leave the intestine and, after a further asexual reproductive phase, migrate to the mosquito’s salivary glands. When the mosquito bites another human, the Plasmodium parasites enter the bloodstream again and the game starts over.

For their study the scientists examined the importance of kinases to the stages in the development of the malaria pathogen. Their approach: “We deactivated the gene coding the individual kinase and then checked whether the cells in the blood phase were still able to develop normally,” explains Pradel. If the cell died, this meant that the kinase was vital for survival and therefore offered a target for medication. If, on the other hand, Plasmodium showed no reaction to deactivation, the kinase might still play an important role during the liver or sexual phase.

“If we could manage to develop a medication for the liver stage, this would be a huge success,” says Pradel. This is, after all, the very first stage of infection in humans. A successful intervention at this point might effectively prevent the outbreak of malaria. But as yet there is no treatment for this stage.

Of the five kinases examined in Würzburg, four could not be deactivated without resulting in the death of the malaria pathogens. These are now top targets for medication. Pradel suspects that the fifth has an important role to play in the sexual stage.

The scientists have published the results of their work in the latest issue of Nature Communications. “This is now a reference publication. People can pick a finding in it and research this further,” says Pradel.

She too will stick with Plasmodium falciparum in her research. Working with this malaria pathogen is “enormously exciting”. It allows “a large number of the secrets of nature” to be researched using just a single cell.