A previously unknown type of gene regulation involving the malaria pathogen has been discovered by an international team of researchers. Scientists from the University of Würzburg were among the party. It remains to be seen whether the discovery will lead to the development of new drugs. 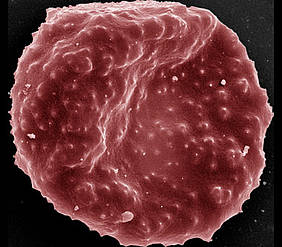 According to current estimates, there are more than 200 million people worldwide suffering from malaria, and roughly one million die each year from this disease. Symptoms include fever, painful joints, headache, vomiting, and seizures. In more serious cases the patient’s organs are also affected, and the disease is usually fatal if left untreated in such cases. The pathogen Plasmodium falciparum is transmitted by mosquitoes, particularly in tropical and subtropical areas.

There are already a whole range of drugs to treat malaria, but these do not nearly meet all the requirements asked of them. Either they are too expensive for large-scale use in third-world countries or they have side-effects that are too severe, or the pathogens have become resistant to them. So, for this reason, researchers throughout the world are searching for new targets in the pathogen’s development cycle.

At the University of Würzburg, too, research has focused on Plasmodium falciparum for many years at the Center for Infection Research (ZINF). Biochemist Dr. Nicolai Siegel has been running a junior research group there for the last two years; together with scientists from Shanghai and Paris he has now discovered some surprising details in the pathogen’s reproductive cycle. The researchers present their work in the current issue of Nature.

A trick protects the pathogen from the immune system

“Malaria pathogens have an extremely effective trick for protecting themselves from being detected and fought by a sufferer’s immune system,” says Nicolai Siegel. Once they have infested the red blood corpuscles of their “victim”, they produce proteins that adhere to the surface of the cells as receptors. The immune system could actually easily detect these and use them as a point of attack.

“But the pathogen has a total of 60 different genes that produce such surface receptors,” explains Siegel. Fifty-nine of these are always inactive, leaving only one active – and the pathogen can switch between them at will. “This makes it so difficult for the immune response.” It is still not known how the pathogen achieves such alternation. The scientific name for this gene family is var genes. And the malaria infection is more or less severe depending on which “family member” is presently active. “We know, for example, that in the cases in which malaria is fatal A-type var genes are expressed particularly strongly,” says Siegel.

An unknown mechanism of gene regulation

The research team has now discovered a previously unknown mechanism for how the malaria parasites control this gene family. At the heart of this process is a special exonuclease protein with the scientific name PfRNase II. Exonucleases are enzymes that are called into action whenever the genetic material in a cell in the form of DNA and RNA is copied or degraded. They are capable, for example, of detecting the inclusion of a false “building block” and removing this from the DNA. They can also break down an existing strand of DNA or RNA while a new strand is formed. In so doing, they also prevent the corresponding proteins from being created.

The newly discovered exonuclease performs a very specific role in the malaria pathogen: “We genetically modified it and then noted that a huge number of genes from the var family were upregulated,” explains Siegel. It appears, therefore, that PfRNase II controls the entire group of genes that determine whether a case of malaria will follow a more severe course or prove to be rather mild. To put this another way, a drug to fight malaria should ensure that the newly discovered exonuclease is as active as possible in the pathogen. This would largely silence the genes responsible for its virulence.

The stages in the pathogen’s development

The development of the pathogen Plasmodium falciparum in humans is extremely intricate and spans several stages. If a human is bitten by an infected mosquito, malaria pathogens migrate through the bloodstream to the liver in a matter of minutes. There they remain for some time, reproducing asexually. After about a week, they return to the blood and attack the red blood corpuscles, triggering the typical malaria fever spikes in the sufferer.

It is not until the single-celled organisms become stressed that they switch to a new stage in their development. Stress here means that too many of them are moving around inside the bloodstream, the body reacts with an immune response, or a drug launches its attack. In all these situations, some cells switch to sexual reproduction. If the sufferer is bitten again, the cells enter the mosquito and settle in its intestine, where they mature into gametes of different sizes, which in principle are comparable to egg and sperm cells in humans. These merge together, leave the intestine, and, after a further asexual reproductive phase, migrate to the mosquito’s salivary glands. When the mosquito bites another human, the Plasmodium parasites enter the bloodstream again and the game starts over.