Malaria: Hot News on the Parasite

A sticky layer of proteins covers the malaria parasite during a certain phase of its life-cycle, as was recently shown by scientists from the Research Center for Infectious Diseases of the University of Würzburg. This discovery might be an important step towards the development of vaccines. 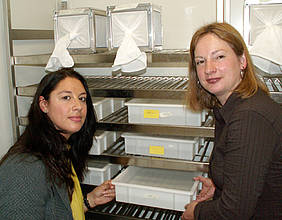 The malaria pathogen Plasmodium falciparum is a parasite consisting of a single cell. It is transmitted to humans by the bite of an Anopheles mosquito. In the human body the pathogen invades the red blood cells, digests them – and thus causes a life-threatening disease.

The parasite's sexual reproduction takes place in the gut of the mosquito: When mosquitoes bite an infected person, they not only take up the blood, but also the parasite. In the gut, the plasmodia transform into generative cells of different sizes, which can, in principle, be compared to human egg and sperm cells. They fuse, leave the midgut and migrate into the mosquito’s salivary glands. During the next blood meal, the mosquito infects another human, and thus completes the parasite´s life cycle.

A protein layer covers the generative cells of the malaria parasite 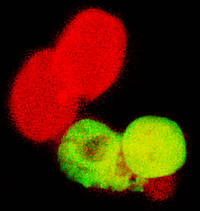 A Würzburg research team around Gabriele Pradel and Nina Simon made an astonishing discovery: During maturation of of its generative cells, the pathogen expresses six special proteins, which assemble to form larger complexes. These protein complexes can later be found on the surface of the “egg” and form a sticky cover. These findings have now been published in the Journal of Biological Chemistry.

Why is this such hot news? “The sticky cover might function to capture the ‘sperm’ cells. But it is also possible that the egg protects itself against the aggressive environment of the mosquito midgut”, Gabriele Pradel speculates.

“Egg” of a malaria parasite in the midst of red blood cells: The newly identified protein layer has been made visible by means of a green dye. Photo: Gabriele Pradel

A protective mechanism would in fact be plausible. In the mosquito gut the malaria parasites initially live protected inside the human red blood cells. However, these rupture as soon as the generative cells are mature – from this moment on a new protective shield would be useful for the survival of the pathogen.

A new target for a vaccine?

This sticky shield might be a weak point of the malaria parasite. If essential for malaria reproduction, the proteins would be an attractive target for so-called transmission blocking vaccines. But first of all, Gabriele Pradel and her team have to identify the real purpose of the layer. And this can take several years.

New measures against malaria are needed urgently: All around the world, an estimated one to three million people die of this infection every year. The pathogens are getting more and more resistant against existing drugs; a possible vaccine is being clinically tested. Other prospective vaccines have all proved to be without effect.

Break through by breeding mosquitoes

The Würzburg research group studies the development of the malaria parasites in the Anopheles mosquito in a high security lab. Here, they rear the mosquitoes, from the eggs, to the larvae and the pupae, and finally to the adult insects. For their experiments, the scientists take the freshly hatched mosquitoes and have them suck human blood to which they added plasmodia.

The breeding of Anopheles mosquitoes in the so-called insectory is Gabriele Pradel’s pride and joy: “Within Germany, similar research opportunities only exist in Hamburg and Heidelberg.” Even globally, they are rare: Only a total of about ten laboratories have one.

The microbiologist Gabriele Pradel is heading a young investigator group at the Würzburg Research Center for Infectious Diseases since 2005. The German Research Foundation (DFG) sponsors her work in the framework of the Emmy Noether Program.