Living cells made to fluoresce

Individual molecules and their dynamics can also be made visible in living cells using conventional fluorophores at a resolution of around 20 nanometers. How this is done is being revealed for the first time by researchers from Würzburg, Bielefeld, and New York in the journal “Nature Methods”.

What happens between the molecules in a cell? How can the various processes be rendered visible? The team led by Professor Markus Sauer has been looking into this issue at the University of Würzburg’s Biocenter. The group is deploying the very latest techniques in fluorescence microscopy, which offer outstanding temporal and spatial resolution.

How does fluorescence microscopy work? To put it simply, DNA, proteins, or other molecules in the cell are labeled with fluorescent dyes. If laser pulses are then “fired” at the cell, the labeled molecules are illuminated briefly. Their fluorescence signal, their “light echo” so to speak, can be made visible using technical tricks.

Anyone wishing to image a number of individual proteins, for example, using fluorescence microscopy, is faced with a challenge: if all the proteins in the cell are illuminated at the same time, all that appears under the microscope is a blurred spot of light.

The reason for this is that the proteins lie too close together, their light signals overlap – like on a cruise ship where the light is on in all the cabins. From too far away the eye only sees a single spot of light. However, if the lights on board were to be switched on individually and only for a short time, it would be possible to make out the position of each cabin accurately. “If the ship were moving, this would, of course, have to be done quickly to prevent the light signals from becoming blurred,” says Markus Sauer.

This is the strategy that the Würzburg team is applying – using fluorophores that can be switched on and off by light signals that are “optically switchable”, as the researchers say. The result is significantly sharper images of the states in the cell.

Optically switchable fluorophores do not work in living cells because the presence of oxygen causes interference – this has been the prevailing opinion in science to date. But Sauer’s team, working with colleagues in Bielefeld and New York, has now shown for the first time that the opposite is true: “We have figured out the mechanism and know for a fact that it also works in living cells.”

What does this mechanism entail? Cells contain glutathione, which, following laser excitation, places most commercially available optically switchable dyes in a stable “off” state lasting several seconds. At the same time, a reaction with oxygen takes place, which switches the dyes back on but is very inefficient. “Most of the dye molecules are therefore continuously off, and this is precisely what is needed for the super-resolution imaging to work,” explains Professor Sauer.

Histones labeled in the cell nucleus

The scientists are parading their methodology in “Nature Methods” using the histones of living human cells. Histones are proteins that help pack DNA in the cell nucleus in a space-saving manner. There are five different histones; the researchers worked with variant 2B.

Next step: to observe cell division

This method has enabled the researchers to confirm a known fact: DNA packed with histones moves around inside the cell nucleus and does so, depending on the phase of the cell cycle, at a speed of a few nanometers per second. Sauer: “The next step now is to track the process of cell division at a high resolution under the microscope.” 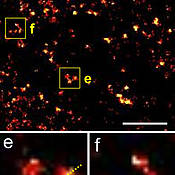