Fruit flies' activity peaks especially in the morning and late afternoon. The insects extend their midday siesta on long summer days. Researchers from the University of Würzburg have now found out what triggers this behaviour. A miniature pair of eyelets also discovered in Würzburg in the late 80s plays a crucial role in this context. 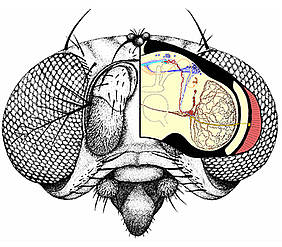 The large compound eyes left and right are clearly recognisable in the head of the fruit fly. The four-cell Hofbauer-Buchner eyelet (yellow; only one eyelet shown in the drawing) is located underneath the compound eye. From the eyelets, nerve fibres (also yellow) run directly to the clock network in the fly's brain. (Photo: team Helfrich-Förster)

In 1989, the Würzburg biologists Alois Hofbauer and Erich Buchner reported a surprising finding in the journal "Naturwissenschaften": They had identified a new pair of eyelets in drosophila unknown until then. The fruit fly was considered an important model organism for zoologists and geneticists even back then with scores of scientists showing an interest in the tiny insect. But they had all failed to detect the additional eyes – no wonder given their microscopic size: Each eyelet consists of just four photoreceptor cells.

Drosophila's activity peaks in the morning and in the late afternoon and they rest during the hottest time of the day. The tiny sensory organs evidently influence when this midday siesta ends. "On long summer days, they delay the onset of the afternoon activity phase," explains Professor Charlotte Helfrich-Förster from the University of Würzburg's Biocenter.

Hardwired in the fly's brain

The scientist has studied drosophila's circadian rhythms for years. In the current study, her research team has been able to show for the first time that the Hofbauer-Buchner eyelets are wired to a clock neuron network in the flies' brain: Nerve fibres run directly from the eyelets to two groups of clock neurons. One of them is responsible for the morning activity whereas the other influences the evening activity.

"At daybreak, light falls onto the eyelets," Helfrich-Forster details. "This light input triggers the production of the two neurotransmitters histamine and acetylcholine. We suppose that acetylcholine activates the neurons relevant for morning activity. At the same time, the histamine seems to indirectly inhibit the circadian clock for the evening peak phase thereby extending the phase of inactivity." Hence, the Hofbauer-Buchner eyelets are part of a complex network that governs drosophila's sleep/activity rhythm.

Mammalian clock similar to that of flies

Another reason why the findings are interesting is because the circadian clocks of animals have changed comparably little in the course of evolution. "Mice, for example, have a neuronal clock network in their brains that shares many similarities with that of the fruit fly," Helfrich-Förster emphasises. "Therefore, drosophila allows us to get deep insights into the circadian clock of mammals and probably into that of humans, too."

Prof. Dr. Charlotte Helfrich-Förster, Biocenter of the University of Würzburg, Head of the Department for Neurobiology and Genetics, phone: +49 931 31-88823, e-mail: charlotte.foerster@biozentrum.uni-wuerzburg.de