It is considered the German equivalent of the Nobel Prize: The internationally renowned Leibniz Prize awarded by the German Research Foundation is endowed with 2.5 million euros. The 2016 laureates now were announced: Professor of Philosophy Dag Nikolaus Hasse is one of them. 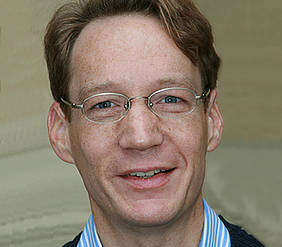 Spirits are high at the University of Würzburg, and the humanities disciplines in particular are thrilled: Dag Nikolaus Hasse (46), Professor of History of Philosophy, was awarded a Leibniz Prize by Deutsche Forschungsgemeinschaft (DFG). Worth 2.5 million euros and highly prestigious, the award is also considered the "German Nobel Prize".

The research focus of Dag Nikolaus Hasse is on Arabic history of philosophy and science and on the Arabic influence in Europe from a historical point of view plus the European history of philosophy and science of the 12th to 16th century as well as Medieval Latin literature. The Leibniz Prize now enables Hasse to press ahead with his research activities.

The career of Dag Nikolaus Hasse

Born in Bremen in 1969, Dag Nikolaus Hasse studied history, classical philology, especially Latin medieval and modern philology, Arabic studies and philosophy in Göttingen. Having obtained his magister degree, he went to the US to work at the Department of Near Eastern Languages and Civilizations of Yale University.

In 1994 he relocated to Warburg Institute of the University of London where he received the doctoral degree with highest distinction in 1997. The same year, he was accepted as a postdoc into the University of Tübingen's graduate school "Ars and Scientia in the Middle Ages". In 2000, Hasse came to Würzburg where he held a Lichtenberg endowed chair from the Volkswagen foundation from 2005 on. In 2010, he was called to the Chair of Philosophy III (history of philosophy).

Large-scale project in the Academies' Programme

Since 2013, Hasse has been head of the large-scale project "Ptolemaeus Arabus et Latinus" of the Bavarian Academy of Sciences. One of the goals is to gain new insight into the common bases of Islamic and European culture in the Middle Ages. The project is set to run for 25 years and has a financial volume of around eleven million euros. It is funded by the German government and the Länder within the scope of the Academies' Programme.

The Julius-Maximilians-Universität Würzburg (JMU) honoured Dag Nikolaus Hasse with its "Röntgen Prize" for exceptionally talented young researchers in 2003. His promise as an outstanding talent in humanities already recognised back then has now been underpinned by the awarding of the Leibniz Prize.

Facts about the Leibniz Prize

The Leibniz Prize will be presented to Hasse in Berlin on 1st March 2016. In the awarding process for 2016, the DFG had to pick ten new Leibniz laureates out of 120 proposed candidates. Hasse is one of three winners from Bavaria.

Since 1986, the DFG has awarded the Leibniz Prize to exceptional scientists for their outstanding achievements in the field of research. The prize winners provided excellent results in their respective fields of research early on in their career already. Moreover, they are expected to have an ongoing impact on German research by further top performance. They can use the prize money at their own discretion.

The Würzburg winners of the Leibniz Prize

Information about the Leibniz laureates from Würzburg