Once again a top award has been given to a researcher of the University of Würzburg: Computer scientist Klaus Schilling wins a Euro 2.5 million research grant to study innovative technologies for picosatellites that work together. The grant is awarded by the European Research Council. 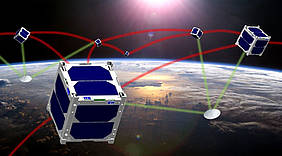 The field of satellite technology is facing an upheaval that has already taken place in the computer industry: The mainframe computers of the 70ies have developed into small computers connected over the Internet. "A similar paradigm change is anticipated for the satellite technology: away from the current conventional large satellites to networked systems consisting of multiple coordinated picosatellites", says Professor Klaus Schilling from the Informatics Institute of the University of Würzburg. In light of this change, he believes that modern telematics methods have to be studied and implemented.

Schilling's team is perfectly familiar with picosatellites: Since 2005, the team has already launched two University Würzburg experimental satellites (short: UWE) into orbit, weighing only one kilogram and having about the size of a milk carton. A third UWE satellite is expected to be launched early 2013, and the team is currently working on UWE number four. Back then, UWE-1 had been the first German picosatellite and can now be admired in the Deutsches Museum in Munich.

"Each picosatellite on its own has a limited capacity. But when several of these satellites work together, we can achieve an impressive total performance", Schilling explains. The technology enables, for instance, observing spots on the earth's surface from different viewing directions to create three-dimensional images. Low-priced, globe-spanning telecommunication networks are another goal the networked picosatellites are expected to achieve in the future.

The goal: a world premier

Over the next five years, the Würzburg researchers will devote their research activities to paving the way for such applications. This requires the corresponding methods of control and communication technology to be further developed. It is planned to conclude the research grant by showing the efficiency of these innovative approaches by deploying a "miniature fleet" of four picosatellites in orbit for the first time in the world: The goal is to keep the satellites in formation using advanced control technologies to enable an optimum flow of information in the network of satellites and ground controllers.

Schilling's research plans are financially supported by a EURO 2.5 million "ERC Advanced Grant". With this grant the European Research Council (ERC) supports scientists from all over the world who are leading in their field and wish to realize seminal and innovative projects in Europe.

The "Advanced Grants" were introduced in 2008. In addition to Klaus Schilling, other scientists from the University of Würzburg have already received the award to date: biomedical scientist Martin Lohse, biophysicist Rainer Hedrich, physicist Laurens Molenkamp and chemist Holger Braunschweig.