Comparisons between babies a few days old in France and Germany reveal that even newborns cry in their native language. This means that the ability to actively produce language is present so much earlier than previously assumed. 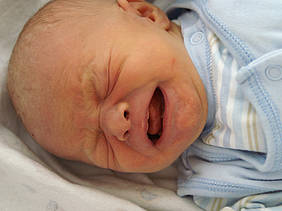 Even in the first few days of their lives, French infants cry differently to German babies. While French newborns more often than not produce cries with a rising melody contour, tiny Germans tend to cry with falling contours. The reason for this is presumably the different intonation patterns in the two languages which are perceived while still fetuses in the womb and then later reproduced.

This is the finding of a study coordinated by scientists from the University of Würzburg. It involved researchers from the Max-Planck-Institute for Human Cognitive and Brain Sciences in Leipzig and the Laboratoire de Sciences Cognitives et Psycholinguistique at the Ecole Normale Supérieure in Paris. The journal Current Biology reports on the study in its latest issue.

Whenever the babies in their first few days of life were hungry, thirsty or simply longing for their mother and made this known with their cries, the scientists were there with their microphones at the ready to record the complaints. “We are the first ones to have provided evidence that language begins with the very first cry melodies,” says Kathleen Wermke. The “we” here are Kathleen Wermke, Head of the Center for Prespeech Development and Development Disorders of the Department of Orthodontics at the University hospital of Würzburg, and her colleague Werner Mende of the Berlin-Brandenburg Academy of Sciences and Humanities.

It has long been known that babies are able to recognize their mother’s voice and to distinguish their “mother tongue” from a foreign language in the last trimester of pregnancy. It was also clear that even just a few months into their lives newborns have mastered the techniques required to produce simple melody arcs and different intonations in their cries. The discussion primarily revolved around the question of when an “uncontrolled cry” develops into the first “product of language”.

“The prevailing opinion used to be that newborns could not actively influence their production of sound,” says Kathleen Wermke. Instead, the thinking was that, as with young monkeys, the cry melody of newborns is determined simply by rises and falls in respiratory pressure and is not influenced by the brain. This belief has now been disproved by the research team.

Significant differences between German and French

For the purposes of their study, the scientists concentrated on German and French newborn babies because there are particularly big differences between these two languages in terms of intonation, and therefore melody and rhythm: “In French, there are a great many words where the stress lies towards the end, producing a rising melody, while in German it is usually the other way round,” explains Angela Friederici of the Max-Planck-Institute for Human Cognitive and Brain Sciences. For example, French children call for “Papá”, while their German counterparts shout for their “Pápa”.

The cry melody as an indicator of language development disorders

Early sensitivity to melodic features of language could help infants later on when they are learning their native language, according to the researchers. “The melody patterns practiced in crying are building blocks for subsequent sound productions, from cooing and babbling through to the first words and sentences,” says Wermke. The roots of this behavior, the researchers believe, lie at the beginning of the evolution of spoken language several million years ago. It has developed together with a special kind of mother-child behavior.

This new knowledge of the early start to the acquisition of language could, in the view of Kathleen Wermke, contribute to the early detection of language development disorders and help improve treatment considerably. “If it is revealed that the cry melody can be used as an indicator of a possible disorder, then obviously this will help early diagnoses,” explains Wermke. Back in 2007, a research team headed by Kathleen Wermke demonstrated that the melody patterns of cries in young infants are a potential risk indicator for later language development disorders.

Studies in other countries as well

Whether newborns actually cry in their native language right from the outset is something that Wermke and her colleagues now want to study in even greater detail. They have already collated the cries they need in other countries, and the analysis is underway.