It all comes down to quantity!

Five female Engineering Science graduates have received awards from the Bavarian Science Ministry. One of them is the Würzburg IT specialist Kathrin Borchert. In her master’s thesis she examined how recommendation systems impact on crowdsourcing platforms. 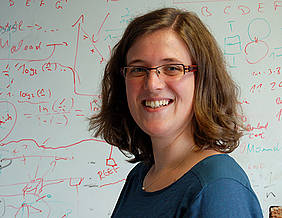 Let us suppose that a photographer wants to place the archive he has amassed in an image database on the Internet in order to boost his sales figures. He needs to add keywords to each photograph so that the photos can be found. He can spend hours doing this after work and at the weekend. Or he can place his order on a so-called crowdsourcing platform and find helpers there who will do this job in a short period of time for little money. The fact that these people may be based in Indonesia or Bangladesh is irrelevant to him.

The manner in which such orders and the people who want to fulfil them come together in the best possible way was examined by Kathrin Borchert in her master’s thesis in Information Technology at the University of Würzburg. She concentrated on commercial crowdsourcing platforms like MicroWorkers – a US provider with around 700,000 registered “MicroWorkers”, who complete millions of orders every year.

“Crowdsourcing is the strategy of outsourcing a service that is usually provided by gainfully employed people for remuneration; the service is outsourced by an organization or private individual using an open call to a mass of unknown players in which the crowdsourcer and/or the crowdsourcees obtain freely usable and direct economic advantages”: this is how the social scientist Christian Papsdorf defines the term in his book “Wie Surfen zu Arbeit wird. Crowdsourcing im Web 2.0.” (How surfing becomes work. Crowdsourcing on the Web 2.0).

The difficult search for the right offer

The major problem with this: “Given the large volume of orders, it is hard for the individual worker to find the right one for him,” explains Kathrin Borchert. What therefore happens sometimes is that crowdworkers take on orders for which they are not adequately qualified in order to avoid a long search. This results in frustration for both parties: the client because the quality of the results is poor, and the worker because he does not get paid.

In her master’s thesis, the IT specialist addressed a possible solution to the problem: the use of recommendation systems. A recommendation system that recommends suitable jobs to those searching for work is fairly similar to the recommendations that Internet traders make to their customers: “You have bought product A. You might therefore also like product B.” In addition, she examined how this system impacts on the players involved.

How a recommendation system has an effect

Does a recommendation system disrupt what has become a fine balance of orders and job seekers on the platform? Does it increase the earnings of everyone? How does it affect the processing speed? Kathrin Borchert sought answers to these and other questions with a simulation model. She made the following finding: “Even comparatively simple algorithms have a positive impact.”

As her work shows, a recommendation system improves earning potential while simultaneously reducing the processing time. “However, this has the consequence that the waiting time for the next order may increase,” says Borchert.

It is unlikely that crowdsourcing platforms will use the results of this master’s thesis to improve their offering. “The algorithms examined are still too simple to be put into practice,” says the IT specialist. For actual use on a platform, they would need to be developed further and supplemented with additional aspects. This is “a field with almost unlimited expansion potential”.

Kathrin Borchert (28) attended school and completed her school-leaving examination in Frankfurt am Main. After a voluntary year of social service, she enrolled at the University of Würzburg – initially for a bachelor’s degree course in Mathematics with a minor in Information Technology, before switching entirely to Information Technology after two semesters.

In September 2014, Kathrin Borchert submitted her master’s thesis “Recommendation Systems in Crowdsourcing Platforms”. Since November 2014, she has been employed as a research associate at the Department of Information Technology III (Communication Networks, Prof. Dr. Phuoc Tran-Gia), where she is conducting research for her doctoral thesis, which revolves around crowdsourcing platforms and their specific problems.

Award from the Bavarian Science Ministry

For her outstanding master’s thesis, Kathrin Borchert has now been presented with an award by the Bavarian Science Minister, Ludwig Spaenle – together with four other female Engineering Science students from Munich, Augsburg, Amberg, and Landshut. These prizes, which come with 2,000 euros in funding, are awarded every year at the suggestion of the universities.

The decorated female graduates have demonstrated by their work “that MINT subjects have long ceased to be a male domain,” says the minister. Their success could inspire girls and young women to look more closely at scientific issues and to enrol on a course of this nature.

On September 15, 2015, State Secretary Bernd Sibler will honor the prize-winners at a certificate presentation ceremony in the Ministry in Munich.