Dr. Markus Bender is heading up a new Emmy Noether junior research group at the University of Würzburg. Armed with around 1.2 million euros, he will be able to pursue his research over the next five years. This will revolve entirely around thrombocytes and their creation. 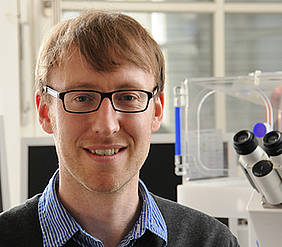 Thrombocytes, commonly known as platelets, are vital for blood clotting. Only elements of their creation are as yet understood, with many details in this complex, biologically unique process still to be explained. Biomedical student Dr. Markus Bender has been researching these details successfully for a number of years now. He will now be able to intensify his work: The German Research Foundation (DFG) has approved his application to set up a junior research group under the Emmy Noether Program. This approval comes with around 1.2 million euros, which Bender can use over the coming five years to take a closer look at the “role of proteins that regulate microtubules and actin filaments in megakaryopoiesis and thrombocytopoiesis” – according to the title of his research project.

The explanation behind the complicated title: Thrombocytes continue to be created by the human body all through life. The crucial processes take place in the bone marrow. Special precursor cells , known as megakaryocytes, settle close to blood vessels then create long, finger-like projections that extend into the vessels. Fragments of these projections pass into the blood, where they are transformed into thrombocytes. “This entire process is very heavily dependent on the skeleton of the cell, the cytoskeleton,” says Markus Bender. Microtubules and actin filaments are the key building blocks of this skeleton. How they interact and what proteins control their development are aspects that will be examined by Bender with the members of his new junior research group.

The team does not have to start from scratch. Bender has already uncovered key details of thrombocyte development in recent years. For example, he has been able to demonstrate that the protein profilin-1 is important in stabilizing the cell’s skeleton. This protein can be found in the platelets of patients with Wiskott-Aldrich syndrome – a disease in which the sufferer’s coagulation and immune system are significantly impaired – in places that are far from the norm. This finding points to the protein being involved in causing the syndrome. For the outcome of this research Bender received the Bayer Thrombosis Research Award 2015 early this year. This came with 30,000 euros. His findings could contribute to the future development of new possibilities for early detection and treatment of this serious disease, writes the donor of the award, the Bayer Science & Education Foundation.

Résumé of the award winner

The combination of basic research and relevance to clinical application is what fascinates Bender about his research. Even in his school days he was interested in medicine – though back then his attention was drawn more to research and less to patient treatment. This is why he enrolled at the University of Würzburg to study “Biomedicine”. “This has great practical relevance, you work in the laboratory early, and you quickly come into contact with researchers,” says Bender.

Following his studies, the now 35-year-old obtained his doctorate at the Würzburg Graduate School of Life Sciences. For his doctoral thesis as well he examined the dynamism of the skeleton of the cell and receptor regulation in platelets. “I have been fortunate to have found my subject early on,” he says today. What particularly fascinates him about this work – aside from the numerous unanswered questions: “The necessary material, i.e. blood, is very easy to access.” And thanks to developments in recent years, results can be achieved very quickly.

In 2012, Bender received a research scholarship from the German Research Foundation (DFG). He completed this under Professor John H. Hartwig at Brigham and Women’s Hospital, which is affiliated to Harvard Medical School in Boston (USA). There Bender also researched the role of the cell’s skeleton in the creation of blood cells. Among other things, he was involved there in the development of a technique that enables the shedding process of megakaryocytes to be controlled and observed live under a microscope.

Since 2014, Bender has been continuing to conduct similar studies at the Würzburg Department of Experimental Biomedicine. Before he took up his new role as the leader of a junior research group, his work was being funded with a return fellowship from the DFG. There are several reasons why he is returning to the university where he obtained his degree and doctorate, as Bender himself says: “The location is perfect, and the conditions here are the best for the field in which I work.” This applies not just to the technical equipment but also to the team within the department. “You won’t find that in this combination and to this extent anywhere else,” says Bender.

Under the Emmy Noether Program, the DFG funds outstanding post-doctoral researchers who demonstrate international experience in research. The program is named for the German mathematician Emmy Noether (1882-1935). Through this program, the DFG aims to provide exceptionally talented young scientists with the opportunity to achieve scientific independence more rapidly.