Invention will be marketed worldwide

Two years ago a new device was introduced to the public by Peter Schneider: the professor of medicine has developed a device capable of measuring the training status of muscles. The invention was filed as a patent application by the university – it was further developed by Soehnle Professional GmbH & Co. KG of Murrhardt, who will market the device worldwide. 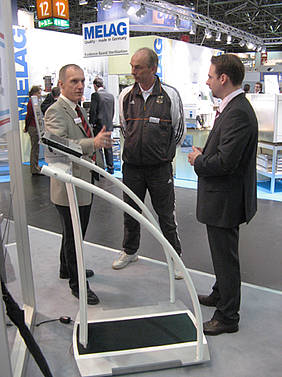 Schneider’s invention has become pretty imposing. As a home made prototype it appeared in the beginning like a set of simple scales coupled to a computer. The development of Soehnle Professional gave it the appearance of a professional sports device of a fitness studio. It has received the name ‘Balance-X-Sensor’.

The subject’s muscle performance is measured whilst he or she performs certain exercises on the ground reaction platform, e.g. fast knee bends. Sensors in the platform transfer forces exerted upon it into a computer. Software, which is also the work of Schneider, processes the signals. The result is the training status of the fast muscles.

This data is interesting for doctors, because it can give indications of the nature of balance distortions, whether they are of central or muscular origin. In addition it gives indications about the risk of fall: several diseases imply an increased risk of fall and breaking the bones. Muscle dystrophy or strokes are diseases that are accompanied by degradation of muscle performance due to lack of nervous stimulation. “The worse the muscle function, the higher the risk of breaking the bones”, Schneider says. Individuals with deficient muscles are unable to prevent a fall quick enough, or, they inefficiently cushion the fall.

The invention of the Würzburg professor is not only useful for rehabilitation and medicine. As an ergometer it helps to monitor fitness training. The device calculates for instance muscle power produced during weight lifting or other activities. Thus top ranking sportsmen/women can monitor the success of their training program.

The university has the right, to make use of an invention which was done by a university teacher during his duties. The intellectual property management of the “Service Center of Forschung und Innovation” (SFI), located in the administration, takes care of filing a patent. The SFI has also promoted and negotiated licensing.

The Balance-X-Sensor was first presented at the MEDICA at Düsseldorf by Soehnle Professional. So far, ten devices were sold at a price of appr. 7000 Euro. Royalties are paid to the university, part of it to the inventor. The device will be fabricated in large numbers shortly.