A Center for Indian Studies is being set up at the University of Würzburg. The Federal Ministry of Research and Education is backing the venture with EUR 460,000. 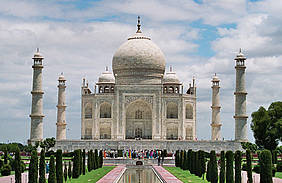 India is booming – and not just economically. In politics and science as well the country is noticeably raising its profile. Yet, knowledge about India at German institutes of higher education remains limited, as do relations between Germans and Indians.

The Federal Research Ministry therefore took the proactive step of launching the funding initiative “A New Passage to India”, supported by the German Academic Exchange Service (DAAD). All German institutes of higher education were given the opportunity to apply for funding from here to set up “Centers for Modern Indian Studies”. Additional money was also earmarked to promote the exchange of German and Indian students and scholars.

Twin success for the university

The University of Würzburg was successful with its applications for both lines of funding: by the end of 2012 it will receive a total of EUR 460,000 to strengthen the India-related competence of its students and scholars. A total of just three centers in Germany were newly included in the scheme: Würzburg, Cologne, and Göttingen.

The project is being coordinated by Professor Heidrun Brückner, Chair of the Department of Indology, and Stephan Schröder-Köhne, Head of the University of Würzburg Graduate Schools.

An important role in setting up the center is being played by Indian partner universities, among them the University of Hyderabad and Jawaharlal Nehru University in New Delhi. Both are among the top ten research universities in India.

Grants for stays in India

What is the university going to do with the government funding? The mobility funding of around EUR 160,000 will be used for grants that will enable students and postgraduates from all disciplines to spend some time at the Indian partner universities. ”Hyderabad and New Delhi are first-rate destinations for natural and life scientists in particular,” says Stephan Schröder-Köhne.

The university will also be financing short-term lectureships: visiting Indian scholars in linguistics, cultural studies, social sciences, and business administration will teach at the University of Würzburg. This will give students first-hand information about modern-day India. And the interdisciplinary India Center will be brimming with life thanks to conferences and workshops.

“Our medium-term goal is to develop a joint interdisciplinary Master’s degree course in ‘Modern India’,” says Professor Heidrun Brückner. Various disciplines and faculties are to contribute to this.