Human tissue from a 3D printer

Early May saw the official launch of the world’s first international Master’s degree program in “biofabrication”. Participating in the program are universities from Australia, the Netherlands, and Germany. The German representative is the University of Würzburg. 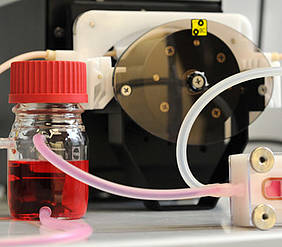 It sounds a bit like science fiction: Accident victims receive a replacement for their destroyed bones that is an exact fit for the damaged site. The material comes from a 3D printer and was built up there layer by layer using special biomaterials subsequently colonized by cells belonging to the patient. But it is not just bones; muscles, nerves, and skin can also be made by the printer to match each patient perfectly. Because the implant was constructed from the body’s own cells, the body does not reject it; the immune system does not have to be suppressed with drugs.

In actual fact, this scenario has been a reality for quite some time now – at least when it comes to healing damaged bone. But scientists are confident that in a few years they will be in a position to use 3D technology to help reconstruct breast tissue for women after breast cancer surgery, for example, or even to produce entire organs.

This coming winter semester, a new international Master’s degree program will start that will focus on precisely this area of research: BIOFAB or, to give it its full name, Biofabrication Training for Future Manufacturing. The parties involved in this world-first offering are:

The course will be supported financially by the European Union and the Australian Government.

“The University of Würzburg has had outstanding expertise in the field of 3D printing of human tissue and in tissue engineering for some time now,” says Professor Jürgen Groll. Groll has been Chairman of the Department for Functional Materials in Medicine and Dentistry at Würzburg since August 2010. One of his areas of expertise is the production of extremely fine threads made from biocompatible polymers, which are spun into nets that serve as implants. Using a technology that is currently unique across Europe, which is known as melt electrospinning writing, Groll is able to direct a polymer melt through the nozzle of a kind of inkjet printer and spread it on a substrate, generating any desired structure.

Professor Paul Dalton, who is largely organizing the program, is one of the leading pioneers in the field of melt electrospinning writing. He developed and has since advanced this technology in his laboratory at the Institute of Health and Biomedical Innovation at Queensland University of Technology. He will help run the new Master’s degree program for the University of Würzburg as well.

“Biofabrication is a research field that includes many disciplines,” says Paul Dalton. Anyone who wants to work in this field should have good knowledge of subjects like chemistry, physics, biology, medicine, robotics, and information technology. Accordingly, graduates in these subjects can apply for a place on the new degree program. A course awaits them that will place a strong emphasis on research with a high proportion of laboratory work. Over the four semesters they will conduct biofabrication research at the top laboratories in Europe and Australia, work with the leading experts, and establish international contacts in the process.

“Biofabrication needs researchers with broad-based knowledge and offers a career option for students with a general interest in science. The graduates of this program will be specialists sought after internationally,” Dalton promises. Thanks to their training they will be capable of “leading this exciting revolution in medicine – a revolution that will be increasingly important for an aging society.”