How sugar finds its way into wine

That plants which store a lot of sugar taste sweet is a known fact. What is new, however, is that these plants also produce a greater yield and have proven to be far more resistant to cold temperatures. Why this happens to be so has now been examined more closely by scientists from the universities of Würzburg and Kaiserslautern. 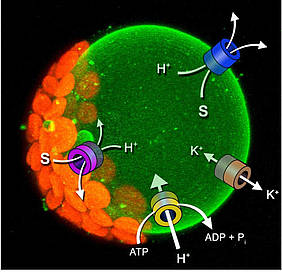 Winegrowers and connoisseurs are familiar with the effect, at least from a flavor point of view: the more sugar a grape carries in its reservoirs, or vacuoles, the sweeter it tastes and the higher the degree Oechsle. However, this is only one effect of vacuoles packed with sugar. As Professor Ekkehard, a biologist and expert in metabolism from Kaiserslautern, recently discovered, sugar also causes plants that are rich in it to survive sudden cold spells more successfully than their counterparts that are not. What is more, they exhibit stronger growth and bear more fruit – which should in turn delight winegrowers.

In his quest for the molecular reasons for these effects, Neuhaus met with Rainer Hedrich. Hedrich is the Chairman of the Department of Molecular Plant Physiology and Biophysics at the University of Würzburg and a sought-after expert in the field of electrophysiology. For more than 20 years now, he has been one of the world’s most eminent scientists in membrane transport research.

In a supra-regional research group funded by the German Research Foundation (DFG), Neuhaus, Hedrich, and teams from Erlangen and Heidelberg examined the importance of sugar transporters and the proton pumps involved for plant survival and yield. “For lovers of semi-sweet fruity wines, the question could also be phrased like so: ‘How do sugar and acid find their way into wine’,” says Hedrich.

What is the story behind transporters, proton pumps, sugar, and acid? “The composition and volume of the contents of a vacuole depend on what transport proteins there are in the membrane of these vacuoles,” explains Hedrich. So-called proton pumps are important agents for these transporters since they drive the storage process.

How sugar ends up in the reservoirs

Under the application of energy, these pumps propel protons into the vacuole, thereby ensuring that the vacuole contains many more protons than the surrounding cell sap. This concentration gradient is a source of energy – the protons force their way back out of the overcrowded vacuole, in the same way as air out of a firmly inflated balloon. This is the starting point for the sugar transporters that sit in the vacuolar membrane: they use the energetically favorable release of protons to carry sugar into the vacuole at the same time according to the exchange principle. Hedrich examined two such proton pumps only recently with Professor Karin Schumacher from the University of Heidelberg.

Via cold-tolerant mutants to the sugar transporter

Although the phenomenon of proton-driven sugar transport was discovered back in the 70s, the molecular nature of the transport protein remained obscure until recently, when a stroke of well-planned luck then shed light on it: while examining a previously unknown gene family of the model plant Arabidopsis thaliana, Neuhaus discovered that the plant is able to survive sudden cold spells more successfully if copies of certain genes in the transport proteins demonstrate increased activity. The reason for this is that the genetically optimized plant stores more glucose in the vacuole and this acts as a frost protection agent.

It was at this point that Rainer Hedrich became involved. He is no stranger to analyzing channels and pumps using highly sensitive biophysical processes. It was during his doctorate back in 1984 in the laboratory of Nobel Prize winner Professor Erwin Neher that Hedrich managed to obtain functional evidence of ion channels in plants for the first time with the help of the so-called patch clamp technique. Using this same technique, he and his colleagues were able to show with isolated vacuoles that Neuhaus had indeed found the long-sought proton-driven sugar transporter.

The “Plant Physiology” journal reported on this work in its online issue of August 13. The “Faculty of 1000” has classified this publication as a “Must read”.

Of course, other questions remain even after this discovery. Ekkehard Neuhaus would now like to find out why cold-optimized Arabidopsis plants produce a greater yield and whether this approach can also be extended to useful plants. Hedrich’s attention is drawn to the following questions: “How does the transport protein know what sugar to transport?” and “How does the plant cell retrieve the sugar from its central reservoir when it is needed?”